The Longest Living Vertebrate is… a Shark

Update Required To play the media you will need to either update your browser to a recent version or update your Flash plugin.
By Anne Ball
27 August, 2016


New research found the longest living animal on Earth with a backbone is – a shark.

The research, published in Science magazine, found the Greenland shark is the longest living vertebrate – or animal with a backbone-- in the world. The gray-colored sharks live in the cold waters of the Arctic and are named after Greenland, the world's largest island.

After examining one of these sharks, scientists decided it was born in the icy waters about 400 years ago, and only died recently. 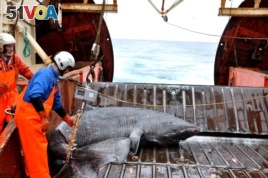 An international team of biologists and physicists was able to estimate the ages of 28 dead female Greenland sharks by studying the lenses of their eyes. It is a new way to learn the age of an animal.

Eight of the sharks were probably 200 years old or more, and could even have been 300 years old. That would make them older than the bowhead whale, which earlier was believed to have been the oldest vertebrate at about 211 years old, according to the Associated Press.

This also means Greenland sharks can live more than three times longer than humans. Many people these days can expect to live into their eighties. African elephants average about 70 years.

The oldest of the Greenland sharks the scientists studied was nearly 5 meters long. It was thought to have been 392 years old when it was caught four years ago. But because the testing method is so new, it is not exact.

The study's lead author is Julius Nielsen, a marine biologist from Denmark. He says the 392 number could be off by as much as 120 years in either direction. That means the shark was probably born sometime between the years 1500 and 1740, with 1620 being the most likely.

"It's an estimate. It's not a determination," Nielsen said. "It is the best we can do."

Even at the lowest age, the shark would have been 272 years old when it died, and still would be the longest-living animal with a backbone, Nielsen said.

"I don't know why they get as old, but I hope someone will find out," Nielsen said.

Christopher Lowe is director of the shark lab at California State University in Long Beach. He was not part of the study, but praised it.

In an email to AP, Lowe wrote that he is not surprised that Greenland sharks live a long time. But, he said, "I'm really shocked by the magnitude of that longevity."

Lowe said that when the water is deep and cold, that usually means fish can live a long time.

Why? It could be because the cold water slows down an animal's metabolism—or the way it processes food into energy.

While Greenland sharks are among the largest fish in the world, they only grow about one centimeter a year. That fact caught Nielson's attention and he decided to find a way to determine their age.

To get the age estimates, Nielsen and his team used a complex system that combines chemical tests, mathematical models and growth measurements.

The research also suggested the female Greenland sharks do not mate and have babies until they are about 150 years old.

That may not be good news, because the Greenland sharks may not have many young. If too many are caught, the species could die out.

The scientists worry that the sharks are being caught up and killed with other species by commercial fisheries.

Some animals without backbones can live even longer. A clam, found in waters off Iceland, lived to be 507 years old. And scientists say some sponges are estimated to be more than 2,000 years old.

Kevin Enochs wrote this story for VOA. Anne Ball wrote it for Learning English with information from the Associated Press. Pete Heinlein was the editor. We want to hear from you. Write to us in the Comments Section and visit us on 51VOA.COM.

vertebrate – n. animal with a backbone

lens – n. the clear part of the eye that focuses light to see images

determination – n. finding out or calculating something

magnitude – n. the size or importance of something

longevity – n. the length of life

metabolism – n. the process that a living thing makes food and water into energy