Making Whiskey without Oak Barrels, How Does It Taste?

Update Required To play the media you will need to either update your browser to a recent version or update your Flash plugin.
By Gregory Stachel
14 December 2021


Martin Janousek and Stu Aaron make whiskey in a small lab in California's Silicon Valley. Whiskey is a sort of alcoholic drink that is made from fermented grains.

Usually, whiskey is aged in barrels made from the wood of an oak tree. But in this lab, there are no barrels. Instead, they are using scientific equipment like syringes, beakers, and vials. They are doing this to find a more environmentally friendly way to make whiskey. 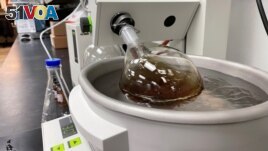 A whiskey sample made by Bespoken Spirits is placed in scientific equipment during a process designed to remove some chemicals from the liquid at the company's lab in Menlo Park, California, U.S. on December 7, 2021. (REUTERS/Nathan Frandino)

The alcoholic drink spends three to five days in a small, metal barrel. The company's technology speeds up oxidation, or a process where oxygen is introduced to a mixture. This changes the taste of the whiskey.

A small piece of wood from an oak tree, no larger than the size of a small finger, is introduced in this process. The whiskey takes on the color, smell, and taste of the wood while it spends the time in the metal barrel.

They lightly burn the oak wood in the lab before cutting it into small pieces known as microstaves. Microstaves are about 1/25,000th the size of a traditional barrel. Janousek is a material scientist and company co-founder. He said this permits them to use 97 percent less wood.

By getting rid of the barrels completely, they can avoid cutting down trees as well as the cost of storing barrels for years in climate-controlled conditions.

Because of the short amount of time their whiskey ages, Bespoken does not lose liquid to evaporation. This lost liquid is known as the "angel's share." Aaron said this permits them to use 20 percent less water.

The Bespoken team runs samples in a gas chromatograph when making the whiskey. This process splits the gas into its basic parts, permitting them to know its chemical identity. Knowing its chemical identity permits them to create unique ways the drink can be used and to follow tastes, like vanilla.

Michael Kudra is a top bartender at Quince in San Francisco. He said the many tastes found in whiskey is why he prefers the drink. At Reuters' request, Kudra tasted the Bespoken Spirits whiskey.

He said he clearly senses the alcohol. Then the rich taste of the deep brown color comes "right away." He then added "that alcohol starts burning your tongue." Kudra said that the whiskey would be better if it has other products added to it. A drink called a whiskey sour has egg white added to it and he said this sort of drink could cut down on the sharp notes of alcohol and bring out the whiskey notes.

Nathan Frandino reported this story for Reuters. Gregory Stachel adapted it for VOA Learning English. Susan Shand was the editor.

ferment – v. to go through a chemical change that results in the production of alcohol