Update Required To play the media you will need to either update your browser to a recent version or update your Flash plugin.
By Pete Musto
07 January, 2019


Malaysia's national news agency [Bernama] reported Monday that the nation's ruling families have agreed to vote for a new king.

King Muhammed V served as Malaysia's largely ceremonial chief of state until he unexpectedly resigned on Sunday. The vote on his replacement reportedly will take place on January 24.

The king resigned after being in power for just two years. This is the first time one of Malaysia's kings has stepped down before completing a five-year term. 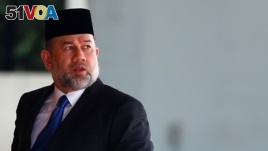 Malaysian former King Muhammad V attends a welcome ceremony at the Parliament House in Kuala Lumpur, Malaysia in 2017. Muhammad V stepped down after two years in power. Malaysia is a constitutional monarchy in which the king's duties are largely ceremonial.

No reason was given for the resignation.

The 49-year-old leader had only just returned to his official duties last week after spending two months on medical leave.

Images reportedly showing him getting married in Russia appeared on social media in December. Posts identified his new wife as Oksana Voevodina, who won a Miss Moscow beauty competition in 2015.

Officials working for King Muhammad have yet to answer requests for comment on the pictures or reports of a marriage.

Media has also reported tension between the king and the government of Prime Minister Mahathir Mohamad. Mahathir, who served as Malaysia's prime minister from 1981 to 2003, returned to power last year.

Malaysia is a constitutional monarchy, where the king's duties are largely ceremonial and the rest of government operates independently. The king's duties include acting as protector of Islam in the Muslim-majority country. The king's approval is needed for the appointment of a prime minister and other top officials.

Malaysia's nine royal families take turns to provide a king, who is chosen through a vote in a Council of Rulers. This group is made up of the nine households, most of which are led by a sultan.

A vote must be held within four weeks of a king leaving office.

Heads of six of the nine households met on Monday at the national palace to decide a date for the election of a new king.

The council agreed that a new king would be elected on January 24. That person would then officially take power on January 31, the council said in a statement.

One sultan could not attend the meeting Monday because he was unwell, while another was outside the country, the council said. The third sultan who was not present was King Muhammad.

Earlier on Monday, Mahathir said the government hoped the council would elect a new king as soon as possible. He added that the government needed to keep the king informed of "certain matters", Bernama reported.

Mahathir led the opposition to a historic election win in May, defeating a group that had governed Malaysia for 60 years.

We want to hear from you. How do you think the choice of a new king will affect Malaysia? Write to us in the Comments Section or on 51VOA.COM.

king – n. a male ruler of a country who usually is given their position after the person in it before them dies, and rules for life

post(s) – n. a piece of writing, image, or other item of content published online, typically on a blog or social media website

constitutional monarchy – n. a system of government in which a country is ruled by a king and queen whose power is limited by a constitution

palace – n. the official home of a king, queen, president