Update Required To play the media you will need to either update your browser to a recent version or update your Flash plugin.
By Dan Friedell
27 June, 2016

The Chilean national soccer team won the Copa America tournament on Sunday night in the U.S. state of New Jersey.

It was the second straight year Chile defeated Argentina on penalty kicks to win the Copa America tournament. 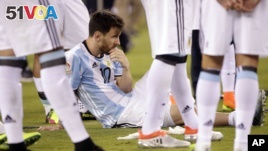 Argentina's star player, Lionel Messi, was one of the players who failed to make his penalty kick.

As the Chilean players celebrated their victory, Messi held his head in his hands and cried.

Many people say Messi is the best soccer player in the world. Perhaps, they say, he is the best ever. He is a five-time FIFA world player of the year with his club team, Barcelona.

But his career is still missing one thing: a major tournament championship.

Messi did help Argentina win a team gold medal at the 2008 Olympic Games in Beijing, China. But that is not considered a major championship in men's soccer.

After Sunday night's game, Messi said he might quit playing for Argentina's national team. He would, however, continue playing with Barcelona.

He told an Argentine television network, "the national team is over for me. It's been four finals, it's not meant for me. I tried. It was the thing I wanted the most, but I couldn't get it, so I think it's over."

Some people say Messi was only reacting to the loss, and that he will be back with the national team in time to play in the 2018 World Cup.

Messi has scored 55 goals playing with Argentina. That is the most ever by an Argentinean soccer player. He scored five goals and assisted on four others during the Copa America tournament.

Chile's coach, Juan Antonio Pizzi, is from Argentina. After the championship game, the coach called Messi "the best player in history."

And, for 10 hours after the game, Messi and the hashtag #NoTeVayasLio were top trending topics on Twitter. The hashtag, in Spanish, means "Do not go, Lio."

One person from Egypt wrote: "Come back Leo. You are the best player in the all history. Don't give up if you can do more."

Dan Friedell wrote this story for Learning English with information from VOANews. Ashley Thompson was the editor.

Do you think Messi will come back and play again for Argentina? We want to know. Write to us in the Comments Section or on 51VOA.COM.

coach – n. the person in charge of organizing and teaching a sports team

penalty kick – n. in soccer when one player kicks the ball toward the goal with only the goalie playing defense. Used to decide the winner of a game if it has ended with both teams having the same score

quarterfinals – n. one of four matches, games, or contests to decide the four people or teams that will continue playing in a competition (such as a tennis tournament