Update Required To play the media you will need to either update your browser to a recent version or update your Flash plugin.
By Bruce Alpert
04 January, 2016


An armed group is occupying a federal building on a wildlife refuge in the western United States.

The anti-government militia broke into the U.S. Fish and Wildlife Service building in Oregon on Saturday. The group's leaders said they are ready to stay for years.

The Federal Bureau of Investigation said it is working to bring the occupation of the wildlife center "to a peaceful resolution." The U.S. Fish and Wildlife Service said its staffers are all safe. But it said on its website that the center is closed until further notice. 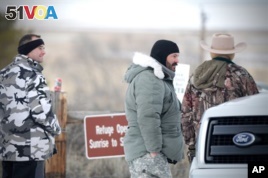 The group says it acted to protest prison sentences given to two cattle farmers. A court found Dwight and Steven Hammond guilty of setting fire on federal land in Oregon. The ranchers had used the land used for grazing by their cattle.

The group posted a sign at the occupied center that accused the government of abusing its power.

"We will be here as long as it takes," said Ammon Bundy, a leader of the occupying group. He said the group has no plan to use force against anyone. But he said, "If force is used against us, we would defend ourselves."

Harney County Sheriff David Ward said the group's claim of working to support local ranchers is false. He said it wants to overthrow the local and federal government to start a movement across the U.S.

Cliven Bundy (father of Ammon) at first won Republican Party support for his 2014 battle. He described it as a case of people fighting over-regulation by the federal government.

But Republicans later criticized Cliven Bundy after he said in an interview that African-Americans were better when they were slaves.

The case that touched off the current protest centers on Dwight Hammond, who is 73 years old, and his son Steven Hammond, 46. The Hammonds were given short sentences after their arrests for setting fire to federal land.

The Hammonds said that they set the fire on their own property to kill off "invasive" species and that the fire spread to the federal land. But an Oregon jury convicted them of arson in 2012.

In October, a federal appeals court ruled the judge made an error in his sentencing. The appeals court said the Hammonds should have served five years each. The judge had given a one-year prison sentence to Dwight Hammond and a three-month sentence to Steven Hammond.

A statement from the Hammonds said the two men are ready to turn themselves in and serve out their longer prison terms. The family said "no patriot group or individual has the right or authority to force an armed standoff...against their wishes." (The two turned themselves in late Monday).

The U.S. government's ownership of land is a big issue, mostly in western states. Ranchers have used the land for grazing since the mass migration west following the War of 1812. But the U.S. Department of Land Management said some grazing hurts habitat and must be regulated.

militiamen – n. a group of people who are not part of the armed forces of a country but are trained or act like soldiers

rancher – n. a person who lives or works on a ranch

occupation – n. a situation in which the military of a foreign government goes into an area or country and takes control of it

grazing – v. to eat grass or other plants that are growing in a field, pasture, etc.

recreation – n. something people do to relax or have fun : activities done for enjoyment

environment – n. the conditions that surround someone or something

intention – n. the thing that you plan to do

motive – n. a reason for doing something

standoff – n. an argument, contest, etc., in which there is no winner