The Swiss city of Geneva is planning activities to regain the title of "peace capital" of the world.

Geneva is home to the United Nations European headquarters. Many peace negotiations have taken place in the city. The United States and the Soviet Union met there to talk about controlling nuclear weapons. Other talks included ways to end wars in Afghanistan and Lebanon.

Other talks in Geneva included Balkan nations that were at war. Talks to end those wars took place in Geneva throughout the 1990s. They were led by the United Nations. 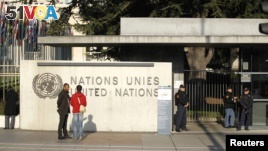 Michael Moller leads the UN office in Geneva. He said he believes his agency, and the city of Geneva, will act as a center for peace in 2016.

He says talks to end the fighting in Yemen will begin January 14. And he says Syrian peace negotiations will begin later that month.

Staffan de Mistura is the UN representative to the Syrian peace talks. He is meeting with people who will take part in the talks. Moller says, "Everybody, almost everybody, wants these talks to be successful so that we can finally get a political solution to this really unacceptable problem."

The United Nations led two Syrian peace negotiations in 2014. Both failed. Last week, the UN Security Council approved a plan for the talks to start again.

Moller says Geneva is a center for conflict resolution because of its reputation as a neutral place. People can focus on what he called the "business of peace."

Moller notes that there were 10,000 meetings and conferences led by the United Nations this year at its European headquarters in Geneva and in Switzerland.

neutral – adj. not supporting either side of an argument, fight, war, etc.

focus on – v. to direct your attention or effort at something specific