French President Calls Terror in Paris an 'Act of War'

Update Required To play the media you will need to either update your browser to a recent version or update your Flash plugin.
By VOA
14 November, 2015


French President Francois Hollande has called the deadly attacks on Paris "an act of war."

The French leader spoke after the Islamic State militant group said it was responsible for the violence in the French capital Friday. Six coordinated attacks killed at least 129 people.

The French president blamed the Islamic State group for the night of horror. He promised to hunt down the attackers. Hollande said "France will triumph over this barbarity."

Islamic State said it acted in response to air strikes against IS fighters in Iraq and Syria. It said France and its supporters "will remain at the top of the list of targets of the Islamic State." The online message appeared in Arabic and French with the Islamic State logo. French officials have not confirmed the authenticity of the statement. However, terrorism experts have not disputed its validity.

A nationwide state of emergency is in place in France. The president deployed 1,500 soldiers in Paris for the "highest level" of security. Eight terrorists died in the six simultaneous attacks on Friday night. Police continue to search for possible accomplices. 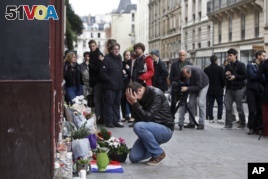 French officials identified one of the attackers as a young Frenchman with links to Islamic extremist activity. A Syrian passport was also found with the body of a suicide bomber.

Many of Paris' attractions, including the Eiffel Tower, are closed. The country's borders are also closed but the main airport is open.

The French president urged residents of Paris to stay inside. But hundreds lined up outside a hospital near the Bataclan concert hall to donate blood. Others walked by the building. Many flowers have been left there in honor of the victims.

Scenes of the attack

At least 1,000 people attended the concert at Bataclan on Friday night. Three attackers entered the theater, opened fire and took hostages. An American rock band, the Eagles of Death Metal, was performing at the time. The Paris police chief said the attackers exploded bombs as police came near. All three attackers were killed.

One of the first explosions was outside the Stade de France sports center. Inside, the French and German national teams were playing a soccer match. Among the crowd was President Hollande.

At the crowded Le Carillon bar and Le Petit Cambodge restaurants, gunmen shot at Parisians who were eating and drinking wine.

In addition to the 129 deaths, officials said 352 people are wounded, almost 100 of them severely.

The Friday night attack came 10 months after three Islamic extremists stormed the offices of the magazine Charlie Hebdo. Twenty people died in the violence including the three attackers.

Reactions from around the world

U.S. President Barack Obama said the attack in Paris is an "attack on all humanity." Secretary of State John Kerry said the U.S. is ready "to provide whatever support the French government may require."

In Germany, Chancellor Angela Merkel had this to say, "We, your German friends, feel very close to you. We cry with you."

Japanese Prime Minister Shinzo Abe observed a moment of silence with Turkish premier Ahmet Davutoglu in honor of the victims. Abe and other heads of state are in Turkey for the G-20 meeting.

In Vatican City, Pope Francis expressed his sadness. He said "there cannot be justification, religious or human" for such attacks.

Britain's Prime Minister David Cameron said on Twitter, "We will do whatever we can do to help." He said he was shocked by the events in Paris and his thoughts and prayers are with the French people.

Hai Do wrote this report with information from VOA News and the Associated Press. Caty Weaver was the editor.

simultaneous - adj. at the same time

accomplice - n. a person who works with or helps someone who is doing something wrong or illegal

authenticity - n. the state of being real or genuine

response - n. something that is being done in reaction to something else

despicable - adj. very bad or unpleasant: deserving to be despised