Update Required To play the media you will need to either update your browser to a recent version or update your Flash plugin.
By Anna Matteo
05 November, 2018

They are the world's smallest human beings.

A premature baby is born too early, before 37 weeks of pregnancy. A micro preemie is born even earlier, spending less than 26 weeks inside the mother. A pregnancy normally lasts about 40 weeks.

Some of the smallest premature babies weigh less than 1,500 grams. And these micro preemies need every gram of weight they have.

When Vanessa Ohakam gave birth to her son, she was only 24 weeks pregnant and she was frightened. Her newborn son, J.C., weighed just a little more than 736 grams.

"I couldn't even change his diaper. I was so nervous and anxious. He just looked so frail. But the nurses were very supportive and encouraging."

But J.C. was lucky. He was a patient at Children's National Medical Center in Washington, D.C. A team of specialists there has come up with a nutrition plan to give micro preemies the best chance to live and grow strong.

The newborn was also part of a nutritional study of micro preemies. The hospital's NICU had a team of specialists from different health care fields. It included doctors specializing in neonatal care, nutritionists and breastfeeding specialists.

Their goal was to increase the weight of pre-term babies and improve their chances of survival. 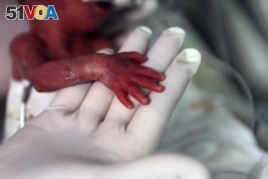 FILE - A nurse holds the hand of a premature baby, who was born at five months of pregnancy, at a hospital in Medellin, Colombia, Aug. 2014.

Because they are born so soon, premature babies can have many developmental issues and health problems. Micro preemies can have even more. Their organs are not fully developed. And they are not able to breastfeed. So helping them to eat and gain weight is most important.

The team looked at what and when the babies ate.

Caitlin Forsythe is the lead nurse who watched over the premature babies in the study. She said the best thing for them is to have mother's milk.

"That is what's best for the premature babies. They tolerate it better, it has great antibodies..."

Forsythe told VOA that she is pleased with the results.

"We have been able to put protocols in place so that there's a standardization of care. We've also increased the amount of mother's own milk we've been providing for the babies, which is great."

Also on the team was a breastfeeding expert. Judy Campbell helps new mothers feed their babies, should they run into trouble. She knows the value of breast milk.

"We know that mother's milk has growth factors in it, can't be replaced with any other substance."

The health care administrator who led the team is Michelande Ridoré. She notes that micro preemies have little body fat and have no energy to waste. So, she explains, the team kept the babies in incubators, which provides a controlled environment. This keeps them warm and helps them to sleep better. As a result, they are less likely to move around and burn calories.

Ridoré says there was a big improvement in the ability of the babies to grow and gain much-needed weight.

"Preemies, in particular, have poor development. We were able to improve their weight by 30 percent."

The team has not yet published a report on the study.

However, Ridoré presented the findings at the Virginia Neonatal Nutrition Association conference in September 2018.

neonatal – adj. of, relating to, or affecting the newborn and especially the human infant during the first month after birth

anxious – adj. afraid or nervous especially about what may happen

incubator – n. medical : a piece of equipment in which very weak or sick babies are placed for special care and protection after their birth

tolerate – v. to endure or resist the action of (something, such as a drug or food) without serious side effects or discomfort

growth factor – n. a substance (as a vitamin B12 or an interleukin) that promotes growth and especially cellular growth

standardize – v. to change (things) so that they are similar and consistent and agree with rules about what is proper and acceptable

formula – n. a milk mixture or substitute for feeding an infant

protocol – n. a system of rules that explain the correct conduct and procedures to be followed in formal situations