Update Required To play the media you will need to either update your browser to a recent version or update your Flash plugin.
By VOA
13 April, 2019


Almost a month has passed since Cyclone Idai hit southeastern Africa. The storm left over 1,000 people dead and many others missing. It caused heavy damage in parts of Mozambique, Zimbabwe and Malawi.

In the port of Beira, along Mozambique's coast, life is still far from normal. Most businesses remain closed. Many people are struggling to recover from Cyclone Idai.

The cyclone destroyed the home of 39-year-old Maria Muchane. She told VOA that she is slowly rebuilding her life.

Muchane said she put old pieces of iron on top of her house so she could have a place to hide and keep out the rain. But, she says, when rainfall comes, the water comes in.

Muchane survived the storm's strong winds. But she was nearly killed when electric wires and the pole that held them up collapsed. The wires and pole have yet to be fixed. 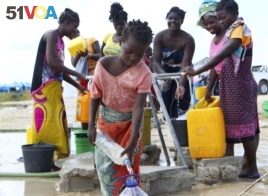 A young girl fetches water at a camp for displaced survivors of cyclone Idai in Beira, Mozambique, April, 2, 2019.

Across Beira, many wires are still on the ground. They are a sign the city government is overwhelmed by Cyclone Idai.

The storm hit Mozambique in the middle of March, killing more than 800 people. It left hundreds of thousands homeless or displaced.
Some people are starting to rebuild, but those who need more money end up in accommodation centers.

Victoria Jone says she has nowhere else to go because the storm destroyed the house a religious group gave her.

More than 150,000 displaced persons from three neighboring areas around Beira are being sheltered in the city. Maria Joao fled from the town of Buzi. She and others say they are afraid of returning home because of the floods that killed their neighbors.

Maria Joao said that she has no plans to return, unless, maybe she gets a home on higher ground. She said the floodwaters were too much, and the floods could come back again next year.

While some businesses have reopened, many others remain closed. Goods left in storm damaged storage centers have to be moved to safer places.

Davis Simango is the mayor of Beira city. He told VOA that everyone there has a role to play in the rebuilding effort.

But in nearly a month since Cyclone Idai destroyed their world, survivors see no end in sight to the many problems caused by the storm.

accommodation – n. a room, group of rooms of building in which people may stay

infrastructure - n. the physical structures, such as roads and power supplies, needed for the operation of businesses or an area