Update Required To play the media you will need to either update your browser to a recent version or update your Flash plugin.
By Anna Matteo
28 March, 2016

Colon cancer is linked with obesity, lack of exercise, and a poor diet high in processed foods.

However, scientists also have identified genetic mutations connected to the disease. 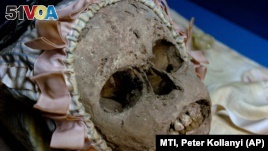 This Hungarian mummy was part of an exhibit at the Hungarian Natural History Museum in Budapest, Hungary, in 2006. Now, the mummy is part of cancer research. (AP Photo/MTI, Peter Kollanyi)

Researchers at Tel Aviv University are studying the evolutionary history of colon cancer. Microbiologist Rina Arbesfeld is with the university. She wanted to answer this genetic question: Where do these mutations come from? Our lifestyle? The environment? Our diet? Or did these mutations also exist a long time ago?

In other words, is the increase in the number of cancer cases today the result of natural evolution alone?

To answer this question, Arbesfeld turned to an unusual source: Hungarian mummies that were discovered in 1994 in a church.

These preserved bodies rested in a cool, dry climate for more than two and half centuries. They give a rare opportunities to research biologists.

An embalmer is a person who prepares a body for burial. Hungarian embalmers used different techniques than Egyptian embalmers.

In ancient Egypt, embalmers removed fluids and internal organs. This made mummification of the bodies happen quickly, over a period of two or three months.

Hungarians embalmers mummified more slowly. They left the fluids and organs intact. This means the mummies have retained tissue that could be better analyzed for evidence of disease.

Arbesfeld and her team isolated DNA samples from 22 mummies. They then sequenced the genetic material in the hunt for mutations. This was not easy. Arbesfeld says that after many tries, her team found one specific mutation in a gene called APC. 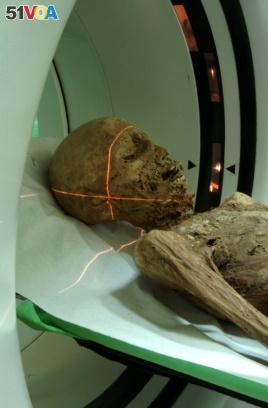 This information lead Arbesfeld to this hypothesis: If our ancestors with the genetic mutation for colon cancer lived long enough, they would have developed the disease, just like us.

Arbesfeld says her next step is to sequence samples from other sources for a larger follow-up study. She says understanding our genetic past can better explain the present.

And understanding a disease's genetic past can help to handle the disease's future.

Cancer of the color kills about 700,000 people a year worldwide. However, it is highly treatable when found early.

This study was published in the journal PloS ONE.

Let us know what you think of this story or practice using the words "mummy" and "embalm" in the Comments Section.

Rosanne Skirble wrote this story for VOA News in Washington. Anna Matteo adapted it for Learning English. Kathleen Struck was the editor.

mummy – n. a body treated for burial with chemical preservatives, as was done in ancient Egypt

mummified – v. to help protect (a dead body) by treating it with oils and covering it in strips of cloth

evolution – n. a theory that the differences in living things resulted from natural changes over a very long time

embalm – v. to treat (a dead body) with special chemicals to keep it from breaking down; embalmer – n. one who embalms

genetic mutations – n. A gene mutation is a permanent change in the DNA sequence that makes up a gene