Update Required To play the media you will need to either update your browser to a recent version or update your Flash plugin.
By Bryan Lynn
04 May 2022


Google says it has added ways for people to request that some personal information not be included in online search results.

In a recent announcement, the company said it would now let people request that some of their personal details be removed from Google searches. Such details could include information like phone numbers, email and physical addresses.

The new policy also permits the removal of information that could aid criminals aiming to steal people's identities. This could include log-in information used to visit websites. 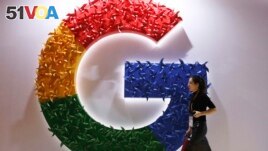 In this Monday, Nov. 5, 2018 file photo, a woman walks past the logo for Google at the China International Import Expo in Shanghai. (AP Photo/Ng Han Guan, File)

Google said in a statement it believes that open access to information is important. But, it added, "privacy and online safety go hand in hand." The new policy "is empowering people with the tools they need to protect themselves and keep their sensitive, personal, identifiable information private," the statement said.

Google had earlier permitted people to request that highly personal details that could cause direct harm be removed. That included information made public through a method called doxxing. To dox someone means to publicly identify or publish private information about the person in a malicious way.

In addition, Google has long permitted the removal of sensitive financial information that could be used for fraudulent activities.

But in its latest announcement, the company said it decided to expand its earlier policy. It did this because personal information is increasingly being used in new ways online.

The new policy recognizes that even having basic personal contact information openly available online can present risks. The company said it had received numerous requests for new ways to remove that kind of material as well.

Google said when examining individual requests, it will study all information on a website to avoid limiting the availability of useful details. This could include information appearing on government or other official websites.

In its latest announcement, Google noted another recent policy change that also aims to protect personal privacy. That policy permits people under age 18 to request the removal of their images from Google search results.

But the company statement warns that information blocked from search results does not mean it cannot be found on the internet.

"It's important to remember that removing content from Google Search won't remove it from the internet," the company said. If removing material from the internet is desired, people are advised to make a request with the organization that hosts the information, Google added.

malicious – adj. intended to harm or upset someone

host –v. the activity of a computer that controls a database