Update Required To play the media you will need to either update your browser to a recent version or update your Flash plugin.
By Bryan Lynn
28 June, 2016


A new report about the attack on a U.S. diplomatic post in Benghazi, Libya, criticizes the United States government.

The report says the Obama administration, as well as military and intelligence agencies, did not provide enough security to prevent the violence. 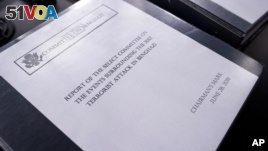 The final report on the 2012 attacks on the U.S. consulate in Benghazi, Libya, where a violent mob killed four Americans, including Ambassador Christopher Stevens, rest on a podium on Capitol Hill in Washington, June 28, 2016.

The Benghazi attack has been officially investigated at least 10 times. The latest investigation lasted two years and cost $7 million.

The chairman of the committee, Republican Representative Trey Gowdy, spoke to reporters about the report's findings. He said the investigation found a clear disconnect between the violence there and what officials thought was happening.

Gowdy said American officials had "real time information but yet somehow they thought the fighting had subsided."

The report criticized the U.S. military for not sending resources to help protect diplomats in Benghazi. It said the military did not act although President Obama and then Secretary of Defense Leon Panetta had ordered action.

Gowdy said, "Nothing was en route to Libya at the time the last two Americans were killed almost eight hours after the attacks began."

The report blamed the Central Intelligence Agency for missing warning signs about the threat of violence in Libya. It also blamed the C.I.A. for writing false intelligence reports after the attack.

It criticized Obama administration officials for their early reaction to the attack. It also criticized them for how they later explained the events to the American people.

Gowdy accused the State Department, the military and the C.I.A. of purposeful and "shameful" delay of the investigation. He said the agencies refused to provide or delayed providing all requested records to the committee.

Hillary Clinton was serving as Secretary of State at the time of the attack. Last October, she answered questions before the Benghazi committee for 11 hours during a televised hearing.

The report does not contain any new evidence against Clinton, who is now the presumptive 2016 Democratic presidential nominee. She has accused the Republican-led committee of acting for political reasons.

On Tuesday, Clinton's campaign said the new report had "not found anything to contradict the conclusions of the multiple, earlier investigations."

Gowdy said his report's conclusion was not aimed at Clinton. But two Republican committee members said they did not think the report fully dealt with Clinton's part in the events. Representatives Jim Jordan and Mike Pompeo released their own statements on the findings.

Pompeo called Clinton's actions after the attacks "morally reprehensible." He and Jordan said her public comments about the attacks were very different from her private comments to family members and diplomats.

Democratic Party members on the committee released their own report Monday. That report concluded that the State Department's security measures were "woefully inadequate" on the night of the attack.

But it said former Secretary of State Clinton "never personally denied any requests for additional security in Benghazi."

It also said that the military could not have done anything differently on the night of the attacks that would have saved the four Americans killed in Benghazi.

The report found that the nearest U.S. military troops to Benghazi were across the Mediterranean Sea in Italy. It argued that they could not have reached Libya in time to rescue the diplomats.

It also found that Clinton was actively "engaged" in dealing with the attack as it was happening.

Bryan Lynn wrote this story for Learning English, based on additional reports from VOANews, the Associated Press and Reuters. Caty Weaver was the editor.

What's your opinion about the Benghazi investigation? Let us know in the Comments or on 51VOA.COM.

en route – adv. on the way, during a journey

contradict – v. to deny or disagree with what someone else says

inadequate – adj. not having the required quality or quantity