Update Required To play the media you will need to either update your browser to a recent version or update your Flash plugin.
By Mario Ritter
27 June, 2016


British officials are dealing with international reaction to Britain's decision to leave the European Union.

Osborne tried to calm financial markets. He said the British economy remains strong and that Britain "remains open for business." He added that Britain's financial system was in a good position to support the country.

"Britain's financial system will help our country deal with any shocks and dampen them not contribute to those shocks or make them worse."

The vote to leave the EU has led to sharp drops in stock prices around the world. It also has fueled unrest on international currency exchanges.

Britain's money, the pound, has decreased in value on currency exchanges around the world. The pound has dropped to its lowest level in 30 years.

Monday, a weaker pound and euro helped push China's money, the yuan, to its lowest exchange value against the American dollar in more than five years.

"To the Bank of Japan," he said, "I'd like to ask it to closely cooperate with central banks of the other G7 countries to take necessary steps for the economy and financial markets."

The Japanese yen has gained more than 15 percent in exchange value to the dollar since the beginning of the year.

This sharp rise hurts Japanese exports, making them more costly and less competitive with other products. It also has led some observers to question whether Japan will break its promise to the Group of 7 industrialized countries. Japanese leaders have said they would not intervene in money markets to reduce the yen's exchange value.

In Europe, French Finance Minister Michel Sapin called on Britain to move quickly to carry out plans to leave the European Union. German Chancellor Angela Merkel said any British withdrawal from the EU should be a civil and organized one.

British officials say 72 percent of voters marked a ballot in the nationwide referendum. About 52 percent of Britons voted to leave the EU.

The government must put into place Article 50 of the EU treaty in order to start an official exit, a process that could take up to two years.

Overturning the referendum is still technically possible. The vote last week was a non-binding measure. The British government may or may not take action. However, experts say a second vote is unlikely. 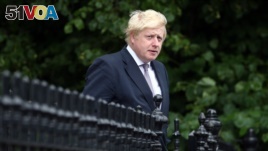 Boris Johnson has been a leader in the "leave" campaign.

Leaders of the campaign to leave the EU are now facing strong criticism. Opponents of leaving say, for example, that Conservative politician Boris Johnson did not have a plan to deal with the political and financial unrest that has followed the vote.

Johnson wrote in The Daily Telegraph newspaper that supporters of remaining in the EU have made too much of the vote's bad consequences.

Prime Minister David Cameron announced plans to resign after the referendum. He said the country needed, in his words, "fresh leadership" to go in the direction of leaving Europe.

Yet the referendum showed deep divisions in Britain. Scotland, Northern Ireland and London all supported remaining in the EU, while other parts of the country supported leaving.

This story is based on reports from VOA reporters Luis Ramirez, Victor Beattie, and Steve Herman. Mario Ritter adapted it for Learning English. George Grow was the editor.

consequences – n. results of an action or event

dampen – v. to reduce intensity, to make something less strong

contribute – v. to give, to provide something

referendum – n. a direct vote usually on a single law or issue

currency – adj. of or related to money

non-binding – adj. having no legal force