Update Required To play the media you will need to either update your browser to a recent version or update your Flash plugin.
By Christopher Jones-Cruise
07 December, 2016

Mattis left military service three years ago. At the time, he led the U.S. Central Command, which carries out U.S. operations in the Middle East. He was also the Supreme Allied Commander of NATO forces.

His leadership in the fight against enemy forces in Afghanistan and Iraq won him respect among many military leaders. 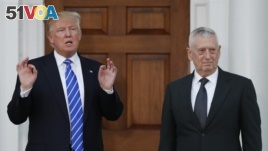 General John Nicholson is the commander of international forces in Afghanistan.

"I first met him in Nangahar province in Afghanistan, where we were in a tough fight in 2006, and he's a very inspirational leader -- I know he inspired me."

Michael O'Hanlon writes about military affairs at the Brookings Institution, a research group in Washington.

"He's thought of as one of the best-read, best-informed and most-experienced generals of his generation."

O'Hanlon says Mattis knows the limits of military power. He says he believes the former general's battlefield experience gives him persuasive power with Trump. O'Hanlon says Trump will be more likely to listen to an argument for restraint, for example, if it comes from Mattis.

Currently, Mattis is not permitted to take the office of defense secretary, however. A U.S. law bans military officers from the position who have fewer than seven years in retirement. Congress would have to change that law.

inspirational – adj. causing people to want to do or create something; giving inspiration

generation – n. a group of people born and living during the same time