Nobel in Physics Awarded for 'Strange States' of Matter

Update Required To play the media you will need to either update your browser to a recent version or update your Flash plugin.
By Bryan Lynn
04 October, 2016


Three British-born scientists have won the 2016 Nobel Prize for Physics.

The Royal Swedish Academy of Sciences announced the award on Tuesday.

The academy is recognizing David J. Thouless, F. Duncan Haldane and J. Michael Kosterlitz for their work in topology, an advanced field of mathematics. Topology describes the properties of objects.

The men launched their experiments in the 1970s. The academy said their research projects brought about a new and unexpected understanding of the way solid materials behave. It said they also developed their own mathematical equations to explain the behaviors.

In a statement, the Nobel judges said, "This year's laureates opened the door on an unknown world where matter can assume strange states. Thanks to their pioneering work, the hunt is now on for new and exotic phases of matter." 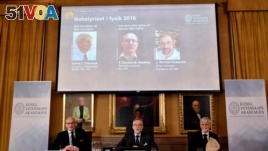 The judges said there is hope that topological materials will help create new generations of electronics and superconductors.

Haldane told reporters he was "very surprised and very gratified" to win the award. "A lot of tremendous new discoveries that are based on this original work are now happening."

He added that the discoveries came by accident, which is often the case with science. "You stumble on it and you have the luck to recognize what you've found is something very interesting."

The Associated Press spoke by telephone with Kosterlitz, who was in Finland. He said he was "a little bit dazzled" and "still trying to take it in."

The Nobel Prize for Physics comes with a monetary prize of $930,000, which is split among the winners. The Nobel laureates will also collect a medal and diploma at an award ceremony on December 10. 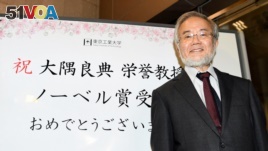 Yoshinori Ohsumi, a professor of Tokyo Institute of Technology smiles in front of a celebration message board after he won the Nobel medicine prize in Yokohama, Japan, October 3, 2016 in this photo released by Kyodo.

The first Nobel Prize of this year – for Physiology or Medicine - was announced Monday. That award went to Japanese scientist Yushinori Ohsumi for experiments related to baker's yeast.

Other Nobel prizes will be announced this week and next week.

laureate – n. person given a prize for achievement

pioneering – adj. one of the first to develop new ideas or methods

superconductor – n. substance capable of allowing electricity to easily flow through it

stumble – v. to come upon unexpectedly or by chance

baker's yeast – n. the common name given to organisms used to help bread or baking products rise when heated