Update Required To play the media you will need to either update your browser to a recent version or update your Flash plugin.
By VOA
04 October, 2016

Maria Sharapova will be able to return to competitive tennis next April, after the Court of Arbitration for Sport reduced her doping ban from 24 months to 15 months.

Sharapova was banned from play after she failed a drug test in January. Tests at the 2016 Australian Open showed she had used meldonium, a banned substance. 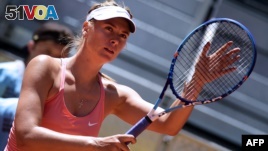 FILE - Russian tennis player Maria Sharapova touches her racket at the end of her match against Colombian Mariana Duque Marino in Madrid on May 5, 2015.

Sharapova admitted she had been taking a drug called Mildronate for over 10 years. But she did not know it was the same as meldonium. The World Anti-Doping Agency banned use of meldonium at the beginning of 2016.

At first, the International Tennis Federation banned Sharapova from competitive tennis for two years. The ban was to end January 25, 2018.

But Sharapova appealed the ruling in the Court of Arbitration for Sport. It ruled on Tuesday to reduce her sentence by nine months. Sharapova will now be able to play in any event that starts after April 25, 2017. As a result, she could compete at the French Open next May.

Sharapova said in a statement that she has "gone from one of the toughest days of my career last March when I learned about my suspension to now, one of my happiest days, as I found out I can return to tennis in April."

arbitration - n. a process of settling an argument or disagreement in which the people or groups on both sides present their opinions and ideas to a third person or group

doping - n. the illegal use of a drug (such as a steroid) to improve an athlete's performance