World Reacts to End of 'Brangelina'

Update Required To play the media you will need to either update your browser to a recent version or update your Flash plugin.
By VOA
21 September, 2016

People continue to react to reports that Hollywood actor Angelina Jolie has asked her husband, actor Brad Pitt, for a divorce.

The move appears to end their marriage and a relationship that some media have called "Brangelina." Jolie and Pitt were among the most powerful married couples in America's show business industry. 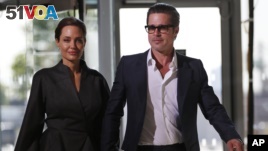 In this Friday, June 13, 2014, file photo, U.S. actress Angelina Jolie, Special Envoy of the United Nations High Commissioner for Refugees, accompanied by her partner and U.S. actor Brad Pitt arrive at the "End Sexual Violence in Conflict" summit in London. Jolie and Pitt were married Saturday, Aug. 23, 2014, in France, according to a spokesman for the couple. (AP Photo/Lefteris Pitarakis, File)

Jolie's lawyer said Tuesday that her decision to divorce was made "for the health of the family."

Jolie and Pitt were together for 12 years and married two years ago, in August 2014.

They became close while filming the 2005 movie, "Mr. & Mrs. Smith." That led to widespread reports in the media that Jolie led to Pitt's divorce from Hollywood star Jennifer Aniston. Pitt and Jolie denied that.

Aniston and Pitt announced their separation in early 2005. Pitt's divorce from Aniston, and his relationship with Jolie, became one of the most talked-about stories in Hollywood.

Many people reacted to the end of Brangelina on social media. Some used GIFs of Jennifer Aniston. They made predictions about what Aniston's reaction to the news might be.

British singer Adele reportedly was deeply saddened by what seemed to be the end of Brangelina. She decided to dedicate her show in New York City Tuesday night to Jolie and Pitt.

Later, Madame Tussaud's museum in London announced on Twitter that it had officially separated its wax statues of Jolie and Pitt.

divorce - n. the ending of a marriage by a legal process

couple - n. two people who are married or who have a romantic or sexual relationship

meme - n. an amusing or interesting picture, video, etc., that is spread widely through the Internet

dedicate - v. to officially make (something) a place for honoring or remembering a person, event, etc.