Update Required To play the media you will need to either update your browser to a recent version or update your Flash plugin.
By VOA
23 June, 2014

For Game One of the 2014 World Cup, fans of Brazil gathered to watch the action at a Brazilian restaurant in the Brooklyn area of New York. They waited with excitement for a goal against the team from Croatia. They did not have to wait long.
Juliana Marcussi smiled as some Brazilian supporters climbed on tables to dance. She says that football is more than just a sport to people from her home country.

"It's sort of a religion for Brazilians. It represents our faith in our country. Even if there are some troubles as we are having right now, you still believe in it because it's part of you."

The next day, supporters of the team from Mexico gathered at a Mexican restaurant in Queens. Marilyn Estrada is a waitress at the restaurant. She says she was excited that Mexico had just defeated Cameroon. 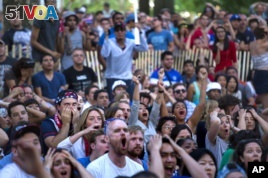 Soccer fans in New York react to a last minute goal that put Portugal even with United States at the end of their 2014 World Cup match.
"I feel really, really happy because we won our first game in the FIFA World Cup, one-zero, so that's exciting. It represents Mexico as a strong country. We could win. We could win this World Cup. We could go all the way!"

Two Mexican-American friends, Pedro and Diego, talked about Mexico's victory as they rode a train a short time later. They spoke with VOA reporter Adam Phillips.

"The best moment was when, you know, we got that goal, that definite score. Being that we already had some chances and we couldn't get it in there, and we got the job done and that's what matters. Luckily, the goalie saved us because... We were about to get scored on, and he flew in the air...

"Do you think it's going to go all the way?"

"Of course, we're hoping for the best. But we're fanatics."

One restaurant on the island of Manhattan served a crowd of mostly German football fans. They had just watched the country's national team score yet another goal against Portugal.

Michael Momm, the owner of the restaurant, was born in Cologne, Germany. He was excited about the German team.

"Fantastic. Actually, much better than I expected. Germany is always nervous before we start. But we are definitely a championship team. We always rise to the occasion."

Nicole Weik, who was born in Berlin, also cheered on Germany. She wore a white German football jersey with a three star design. The stars represent the three German World Cup championship wins.

"Right now we are here to get our fourth star.As Germans, we are quivering for the games forever. And so we have to watch every game, even though we are on vacation!"

There are many games left to enjoy before the FIFA World Cup 2014 ends in the middle of July. The fans of the different national teams in New York City are excited. They are so excited, in fact, that anyone who does not support one team in particular might wish them all success.

This report was based on a story from VOA's Adam Phillips in New York.
Related Articles
go top