Palmyra May Be in Better Condition Than Expected

Update Required To play the media you will need to either update your browser to a recent version or update your Flash plugin.
By Dan Friedell
31 March, 2016


When the Islamic State militants blew up the Temple of Bel in the ancient city of Palmyra in August 2015, experts feared they would destroy many important artifacts from the first century.

UNESCO considered the 2,000-year-old temple one of the most important buildings of the World Heritage ancient city. The UN called the destruction of the ancient temples and tombs in Palmyra a war crime.

Syrian forces, backed by Russian airstrikes, took back control of Palmyra. Now that the city is open, experts say the artifacts are in better shape than many predicted. They say up to 80 percent of the ancient ruins in Palmyra have survived. 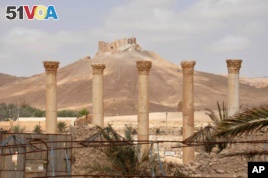 Maamoun Abdulkarim is the Syrian antiquities director. He was able to investigate the 2,000-year-old ruins for the first time after Syrian forces recaptured the city in late March. The Islamic State militants held the ancient city for about 10 months

He said many artifacts, columns, arches and statues have survived. But there is damage to surrounding streets, baths and fences. The faces of some statues were chiseled away.

Abdulkarim and a group of experts are looking to restore the ancient structures. He said to Al-Jazeera, "We know the area centimeter-by-centimeter - all we need is the help of the international community."

In Italy, a former culture minister, Francesco Rutelli, said the artifacts could be restored using three-dimensional, or 3-D, printing. The technology can help re-create damaged structures.

Roger Michel is an American expert from the Institute for Digital Archaeology in Great Britain. Michel promised that he would show a Temple of Bel arch recreated from a 3-D printing in April. 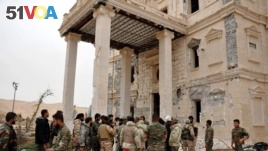 In this photo released on March 24, 2016, by the Syrian official news agency SANA, Syrian government soldiers gather outside a damaged palace, in Palmyra, central Syria.

Michel said to The Guardian, "my intention is to show Islamic State that anything they can blow up we can rebuild exactly as it was before, and rebuild it again and again."

Michel explained that 3-D printing can use the same combination of materials – sand, water and sodium bicarbonate – that ancient builders used to build the temple. It can even use dust left over from buildings destroyed by IS.

One problem the experts will face is the lack of detailed source material like 3-D images. But they say some of the information can come from two-dimensional photographs.

There is already some video shot by drones and photographs made by satellites. But many of the sites are not yet accessible because of land mines and traps left by IS fighters.

Amr Al Azm is a Middle East History and anthropology professor in Ohio and used to work for the antiquities department in Syria. He sees a difficult task ahead.

"The Arch of the Triumph — may be repairable because there is more of it left, lying around close by. The Temple of Bel is going to be far more challenging," he said.

This story was first reported by VOANews.com. Dan Friedell adapted the story for Learning English. Additional information came from The Guardian and The New York Times. Hai Do was the editor.

Do you think experts will be able to restore Palmyra? Write to us in the Comments Section or on 51VOA.COM.

temple – n. a place for prayer

restoration – n. the act or process of returning something to its original condition by repairing it, cleaning it, etc.

drone – n. an aircraft without a pilot on board

dimension – n. the length, width, height, or depth of something : a measurement in one direction (such as the distance from the ceiling to the floor in a room)

chisel – v. to cut or shape (something) with a chisel