Peruvian Beef Stir-Fry is Fusion Cooking at its Best

Update Required To play the media you will need to either update your browser to a recent version or update your Flash plugin.
By Ashley Thompson
14 May 2022

One of the most common foods, or dishes, in Peruvian-Chinese cooking is called lomo saltado. Kimball describes the meat dish as a quick, easy beef stir-fry. A stir-fry is a dish made of foods that are fried quickly over high heat while being stirred, or mixed. Stir-frying is a common way of cooking in Chinese food culture. 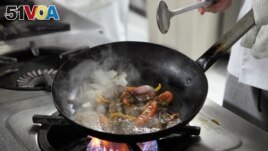 Kimball included a recipe for lomo saltado in his new book Milk Street Tuesday Nights. The cookbook only includes meals that take 45 minutes or less to prepare.

The main focus of Kimball's recipe is the meat. It is cut into long pieces called strips. The raw beef is marinated in soy sauce and then fried over high heat. To marinate means to put meat in a sauce, called a marinade, for a period of time. The sauce softens the meat and adds flavor. Kimball develops flavor by mixing ground cumin into the soy sauce marinade.

Kimball says he prefers to use a cut of meat called sirloin tips. The cut is known to have a meaty flavor and lower cost. Kimball also stir-fries onions, tomatoes and peppers with the beef.

Here is how to make Lomo Saltado. This recipe makes enough food for four people:

Put about .7 kilograms of steak in a medium-sized bowl. Add in 7 mL of cumin and 5 mL each of salt and pepper. Then add 30 mL of soy sauce. Mix the spices and sauce together and add onto the meat. Let the meat marinate at room temperature for 10 minutes. Then, dry the meat and move it to a plate.

In a large skillet over high heat, heat 15 mL of cooking oil until it begins to smoke. Add half of the meat and cook, turning once, until the pieces are browned on both sides. Move the meat onto a plate. Repeat the process with another 15 mL of oil and the rest of the meat. Remove the meat again and put it on a plate.

In the same skillet over medium-high, heat additional oil. Add one chopped red onion. Stir and cook the onion for about two minutes until the pieces start to soften. Stir in 60 mL of red wine vinegar and 45 mL of soy sauce. Cook for one minute until the sauce starts to thicken. Then, add 2 pieces of fresh garlic and a sliced jalapeno pepper, with its seeds removed. Cook until you start to smell the garlic, about 30 seconds.

Add 300 mL of cherry tomatoes that have been cut in half.

Next, add the cooked meat and any juices from the meat to the skillet. Cook the whole mixture until the meat is just warmed through, for about 30 seconds.

Finally, taste the mixture and add any additional salt or pepper needed.

At chifa restaurants in Peru, lomo saltado is usually served with French fries. Kimball recommends serving it over rice, which will soak up the flavorful juices.

ingredient - n. one of the things that are used to make a food, product, etc.

soy sauce - n. a brown sauce that is made from soybeans and used especially in Chinese and Japanese cooking

focus - n. a subject that is being discussed or studied

flavor - n. the quality of something that you can taste