Update Required To play the media you will need to either update your browser to a recent version or update your Flash plugin.
By Dan Friedell
15 April 2022


For the past week, Argentina was home to the first-ever women's polo World Cup. The event, held from April 9 to 16, included teams from Argentina, the United States, England, Ireland, Brazil and Italy.

Italian-Argentine polo player Camila Rossi plays for Italy. Ten years ago, she said, there were no teams for girls. When she started the sport, she played on boys' teams. Back then, she added, the boys gave her funny looks.

For American Erica Gandocomar, the tournament is "a dream come true." She said that for a long time, leaders of the sport in the United States refused to start a women's team. 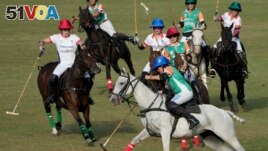 "Polo has been dominated by men for a long time," she said. "And now ... women are being heard."

Horacio Areco is the Argentina president of the International Polo Federation. He said it is "impressive how many women started playing" in recent years.

Sports historians say polo is one of the world's oldest team sports. Until recently, it was always played by men.

The sport is played with two teams on a field about 275 meters long. Each team has four players who ride horses. They score points by hitting a ball through the other team's goal. The players on horseback use long wooden sticks called mallets to hit the ball.

The game came to Argentina with the arrival of immigrants from Great Britain in the 1800s.

Today, Argentina has a long polo tradition. It also trains horses for the sport and sends them to polo players around the world. The horses can cost up to $100,000.

Rossi said with the arrival of the World Cup, the sport can be promoted and grown around the world.

Clara Cassino is a player from Argentina. She said "the growth of women's polo has been so impressive." She noted that the sport is now growing more quickly for women than for men.

About five years ago, another women's polo competition took place in Argentina. It was held at the same time as a men's tournament. Many of today's players say that tournament made Great Britain and the United States more interested in starting women's teams.

Azucena Uranga is a member of the team from Argentina. She called the World Cup event "an incredible opportunity."

Uranga's father, Delfin, is the president of Argentina's polo association. He said his country's leadership in the sport is important, because other countries often follow Argentina's example.

"It sends a message to the world," he said. "To give women an opportunity to compete at the same level as men."

Dan Friedell adapted this story for VOA Learning English based on reports by Reuters and The Associated Press.

Do women play polo where you live? If not, do you think the sport will start now that there is a World Cup? Write to us in the Comments Section and visit 51VOA.COM.

tournament – n. a sports competition that involves many players and teams over a number of days

dominate – v. to have control over something or someone

promote – v. to make people aware of something through advertising