US High Court to Decide How Artists Can Use Others’ Works

Update Required To play the media you will need to either update your browser to a recent version or update your Flash plugin.
By Dan Novak
29 March 2022


The U.S. Supreme Court agreed on Monday to hear a case that could help decide how artists can use the works of others.

The court agreed to decide a copyright dispute between the photographer Lynn Goldsmith and the estate of modern artist Andy Warhol. The dispute is over Warhol's 1984 paintings of music star Prince.

The justices agreed to hear the Andy Warhol Foundation's appeal of a lower court ruling. That ruling held that Warhol's paintings based on a picture of Prince by Goldsmith were not protected by the fair use idea of U.S. copyright law. The photos were taken for Newsweek magazine in 1981. 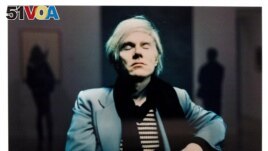 People are reflected on a portrait of U.S. artist Andy Warhol by Timm Rautert during the exhibit "Warhol on Warhol" at Madrid's Casa Encendida Cultural Centre on November 23, 2007. REUTERS/Susana Vera/File Photo

Goldsmith, who is now 74 years old, countersued Warhol's estate in 2017 over Warhol's unlicensed paintings of Prince. Warhol's estate had asked a federal court in New York City to find that his works did not violate her copyright. Warhol was famous for basing some of his art on photographs and available images. He died in 1987.

Goldsmith has said she did not learn about the unlicensed works until after Prince died in 2016. She asked the court to block Warhol's estate from making more use of her work. She also wants to be paid what are called damages for use of her work.

A judge had earlier ruled that Warhol's works were protected against Goldsmith's claims by the idea of fair use. Under fair use, copyrighted work may be used without the owner's permission if several ideas of fairness are observed. For example, fair use is permitted if the artist changes, or transforms, the work into something new. Fair use is also permitted if the new work is a parody.

The judge found Warhol's paintings transformed Goldsmith's picture of Prince as a "vulnerable human being" by showing him as an "iconic, larger-than-life figure."

Goldsmith disputed that earlier decision. The case then came before the 2nd U.S. Circuit Court of Appeals in New York. Last year, the court decided that Warhol's paintings had not made fair use of Goldsmith's photo. That made it possible for Goldsmith's case to continue.

The 2nd Circuit decided that a transformative work must have a "fundamentally different and new artistic purpose and character." The court said that Warhol's paintings were "much closer to presenting the same work in a different form."

The Andy Warhol Foundation then asked the U.S. Supreme Court in December to overturn the 2nd Circuit decision. The foundation argued that the decision created legal uncertainty for all art like Warhol's.

Warhol Foundation lawyer Roman Martinez said he welcomed the high court's decision to hear the case. He hopes it will "recognize that Andy Warhol's transformative works of art are fully protected by law."

Goldsmith said in a statement provided by one of her lawyers that she looks forward to continuing her legal fight at the Supreme Court.

"I fought this suit to protect not only my own rights, but the rights of all photographers and visual artists to make a living by licensing their creative work - and also to decide when, how and even whether to exploit their creative works or license others to do so," Goldsmith said.

The Supreme Court dealt with the issue of copyright fair use last year. One of its rulings found that the use of Oracle Corporation's software code by Google in its Android operating system was protected.

In a 1994 Supreme Court ruling on fair use involving artistic creation, the justices found that rap music group 2 Live Crew's parody of a song by performer Roy Orbison was fair use.

copyright — n. the legal right to be the only one to reproduce, publish, and sell a book, musical recording or other work for a certain period of time

estate — n. an organization that looks after things left by a person after they die

countersue — v. to use a legal process to get a court of law to change an earlier decision or to bring a legal case in reaction to legal actions taken by someone else

unlicensed — adj. not having an official document giving you permission to do, own, or make something

transform — v. to change something completely (usually in a good way)

parody — n. a piece of writing, music, or other work that imitates the style of someone or something else in a humorous way

vulnerable — adj. able to be hurt; at risk of being harmed

iconic — adj. describing a widely known image, object or person that represents something; a person who is very successful and famous

exploit — v. to use (someone or something) in a way that helps you unfairly