Update Required To play the media you will need to either update your browser to a recent version or update your Flash plugin.
By Dan Friedell
05 May 2022


A new study has found that all dogs have different personalities – even dogs of the same breed.

Elinor Karlsson studies genetics at the University of Massachusetts. She co-wrote a report about the study, which appeared recently in the publication Science.

Karlsson said, "Every dog really is an individual." 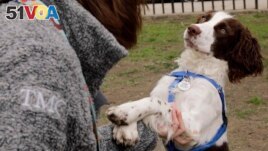 Karlsson noted there is "a huge amount of variation" even between dogs that look the same.

At a New York dog park, dog owners told The Associated Press about the different characteristics of their pets.

Elizabeth Kelly owns an English springer spaniel. She called her dog friendly, but also "kind of the queen bee." In other words, her dog likes to act like she is in charge of other dogs.

Suly Ortiz owns a yellow Labrador. She described her dog as "calm, lazy and shy."

Rachel Kim has a dog that is a mix of several breeds. She described the animal as "super independent" and loving.

Dogs first became friendly to humans around 14,000 years ago. But the idea of dog breeds is much more recent. Around 160 years ago, humans began to breed dogs to have certain physical qualities, such as fur texture and color and ear shape.

Karlsson said her aim was to learn how much a dog's breed affects their behavior.

The answer? Breed does not decide an individual dog's personality.

Karlsson's team gathered information from 18,000 dog owners and studied the genetic code of over 2,000 dogs.

The researchers found that some qualities are based on genetics. However, there is no guarantee that two dogs of the same breed will behave in the same way.

For example, they found golden retrievers that do not retrieve. To "retrieve" is to get and bring something back from a place.

Some breeds, such as huskies and beagles, may be more likely to howl – or make a long, loud barking sound. But many of these dogs do not howl, as owner observations showed.

In addition, the researchers were not able to link aggression to a certain breed.

Jeff Kidd studies genetics at the University of Michigan. He was not involved in the dog project. He said the connection between dog breed and behavior "is much lower than most expected."

Adam Boyko studies genetics at Cornell University. He also was not involved in the dog research. He noted that Karlsson and her team organized the most data ever about dogs.

breed – n. a kind of dog, cat, horse or other animal that has been produced by matching two parent animals based on their traits

variation –n. a change in the form or condition or amount of somthing

characteristic – n. the special qualities or traits of a person or thing

lazy – adj. not liking to work hard or be active

personality – n. the way of behaving that makes a person or thing different from another person

texture – n. the way something feels when you touch it

bark – n. a short loud sound made by a dog