Update Required To play the media you will need to either update your browser to a recent version or update your Flash plugin.
By Dan Novak
27 September 2022


A public library in Boston has a place for serving alcoholic, book-themed drinks. A library in Maryland has a basketball court steps away. Another in Delaware has a room for teenagers to play video games.

Public libraries around the United States are changing what it means to be a library. Instead of just being places for books, they have become community centers.

"The days of basically being a book repository...are over. They are long gone," said Lea Rosell. She is director of the Lewes Public Library in the state of Delaware. "We have one quiet room designated in this library. I think that goes to show that things are changing." 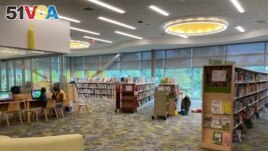 Lewes opened its new library in 2016. Rosell said the newer and larger building has been able to attract new visitors and has permitted the library to hold more events. This month, the library held events like discussions about books and current events, movie showings, poetry writing workshops, and Spanish-language discussions. Rosell said one of the most popular events for children this year was when a nature center brought in several reptiles.

The Lewes library also has a special room for teenagers, with books aimed at teens and young adults. In the Teen Tech Suite, they can use things like 3-D printers and virtual reality goggles.

Delaware Libraries also has a program to mail a free book to families with young children each month. The goal is provide children with a large book collection in their home without having to pay for it themselves.

In some communities, libraries are where people access social services. Rossell said that the library in Lewes and other libraries across the state can "fill the gaps" in community services. She said that because Delaware is a low-tax state, it does not have many community centers.

Maria McCauley is the president of the Public Library Association and the director of public libraries in Cambridge, Massachusetts.

Wheaton, Maryland's, new public library opened in 2019 and is attached to a community recreation center. Library director Anita Vasallo said the combined building has gotten new visitors. For example, she said teenagers who use the recreation center's basketball court will "step into the library to see what's going on." There are also special spaces in the library for children to do their homework.

McCauley said many libraries across the country have been built next to other services. In Cambridge, she said on one city block there is a library, a school, a community center, and an athletics center.

Wheaton is in Montgomery County, Maryland, one of the most diverse counties in the United States. The county's school system has students from more than 164 countries speaking 184 languages. The diversity of the community drives much of the library's programming.

For English learners, the library holds weekly conversation clubs, where people can talk in English in an informal setting. The library also holds job fairs and partners with local organizations to help families get health insurance. People who cannot afford to buy their own laptop computers can borrow one from the library.

The American Library Association found that across the country, 76 percent of libraries help visitors use government programs and services. About 73 percent help people apply for jobs.

"We really want libraries to be community hubs," Vasallo said. "That's what they're meant to be."

The Wheaton and Lewes libraries have book stores where visitors can buy new and used books, often from the library's collection. The money raised goes back to supporting the libraries.

Wheaton's library also has a café. Boston's historic Public Library has a tea room and bar with drinks like "Tequila Mockingbird" and "Of Milk and Men."

"The idea of a library as a kind of a silent place where you come and do your research and think deep thoughts — it's not really what we do," Vasallo said. "Libraries can be very lively places that can be noisy. They should be full of life."

repository — n. a place where a large amount of something is stored

designate — v. to choose for a specific purpose or use

reptile — n. a cold-blooded animal that lays eggs and has a hard body covering

access — v. to be able to get into or to use

gap –n. a space between were one thing stops and another begins

enrich — v. to improve the quality of something

diverse — adj. involving many different kinds or groups of things

block –n. an area of land surrounded by four streets in a city or town

hub — n. a central or most active place