Activists Call on Educators to Build up School Systems after Pandemic

Update Required To play the media you will need to either update your browser to a recent version or update your Flash plugin.
By Bryan Lynn
20 September 2022


Education activists have called on world leaders to take steps to build up school systems weakened by the COVID-19 pandemic.

The call came during a United Nations conference centered on "transforming" education systems across the world. The gathering was held Monday, before the official start of the yearly U.N. General Assembly meeting in New York.

Activists attending the conference appealed to the world's nations to make sure children in their countries do not fall too far behind. They urged nations to prioritize schools and put money back into education systems that suffered during the pandemic. 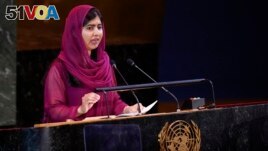 One person taking part was Pakistani human rights activist Malala Yousafzai. Yousafzai won the Nobel Peace Prize in 2014 for her campaigning efforts that girls should have a universal right to education. She currently serves as a U.N. Messenger of Peace.

Yousafzai told the U.N. conference, several "years ago, I stood on this platform hoping that the voice of a teenage girl who took a bullet in standing up for her education would be heard."

Yousafzai added that on that day, countries, corporations and others promised to work together to reach a goal that every child would be able to attend school by 2030. But now, she said, "It is heartbreaking that halfway through that target date, we are facing an education emergency."

Yousafzai urged world leaders to put at least 20 percent of their budgets toward school systems. "Most of you know what exactly needs to be done," she said.

Nigerian youth activist Karimot Odebode was also clear in her appeal. "We demand you take responsibility," Odebode told U.N. General Assembly members. "We will not stop until every person in every village and every highland has access to an education."

An international report supported by the World Band, UNESCO, UNICEF and other aid organizations demonstrates how education was harmed during the COVID-19 pandemic. The report found that the percentage of 10-year-old children in poor and middle-income countries who cannot read a simple story had increased to about 70 percent. That was a rise of about 13 percent compared to before the pandemic, the report said.

Educational experts say solving the current learning issues will require changes to systemic problems that existed even before the pandemic. They believe it will be necessary to increase school spending and change policies to increase access for girls and disabled students. The experts said teaching methods should also be changed to improve students' critical thinking abilities rather than centering on memorization.

"This is a once-in-a-generation opportunity for us to radically transform education," U.N. Deputy Secretary-General Amina Mohammed told reporters ahead of the education meeting.

A closing statement from the U.N. after the conference said 130 countries had promised to "reboot" their education systems and seek actions to end the worldwide learning crisis.

When COVID-19 closed schools around the world in spring 2020, many children simply stopped learning. Some students stayed out of class for months, while others were delayed much longer.

Many children did not have a way to take part in distance learning. A 2020 study by UNICEF and the International Telecommunication Union estimated that more than 800 million young people around the world lacked internet access at home.

prioritize – v. decide which things are the most important so they can be dealt with first

platform – n. a raised surface for people to stand on, especially when they are speaking to a large group of people

access – n. the ability to find or see something

opportunity – n. a situation that makes it possible for you to do something

radical – adj. relating to or affecting the fundamental nature of something