Update Required To play the media you will need to either update your browser to a recent version or update your Flash plugin.
By Bryan Lynn
27 August 2022


Ukrainian students seeking to attend college in the United States are receiving assistance from many American schools.

A recent report covering 559 schools found that at least 120 universities are offering some kind of assistance to Ukrainian students.

The nonprofit Institute of International Education (IIE) prepared the report. 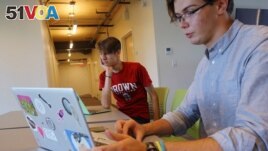 Hlib Burtsev and Oleksii Shebanov, both from Ukraine, check their email in the common area of their dorm ahead of their first year at Brown University in Providence, Rhode Island, U.S., August 16, 2022. (REUTERS/Brian Snyder)

The assistance includes extra time to complete applications and eased requirements to provide some official documents. U.S. colleges have also expanded financial aid and increased the number of positions for Ukrainian students.

The University of Chicago launched a $20 million program that includes tuition for Ukrainian students. Texas A&M is also providing assistance for tuition and living costs. Hampton University in Virginia invited up to 100 students affected by the war to study for free during the summer.

As the war in Ukraine enters its sixth month, some students are now arriving at U.S. colleges to begin the school year. Jason Czyz, co-president at IIE, called U.S. higher education a "safe haven" for international students.

The Ukrainian students had to overcome many barriers to reach America. The U.S. embassy in Kyiv is not issuing student visas. Students were forced to visit diplomatic offices elsewhere. Making such a trip is especially difficult for men, who must prove they are students to avoid serving in the military.

Eighteen-year-old Oleksandr Sinhayivskyy is one example. The young man will attend Georgetown University in Washington D.C. this fall. He ended up traveling to Romania to get a visa and Georgetown paid for his hotel stay.

Sinhayivskyy told Reuters news agency he had planned to study business at Georgetown. But after experiencing the destruction in his country, he decided to study international relations and become a politician in Ukraine.

"I did not change the direction with my own compass," Sinhayivskyy said. Instead, he said the events happening in his country had pointed him in another direction.

Another student, Hlib Burtsev, imagined himself filming his reaction to the application decisions from U.S. universities. But when those decisions came, the 18-year-old was often sitting in a windowless room or bomb shelter in Kyiv.

About a month after Russia invaded Ukraine, Burtsev was accepted into Rhode Island's Brown University for this fall. The school also invited him to attend school for the summer and paid for his food, flights and housing. "I didn't expect such support from a university somewhere very far away," Burtsev said. "Everything is very exciting, new people, new opportunities."

Once in the United States, many Ukrainian students are conflicted, feeling both gratitude and guilt. They worry about family members at home. Many decide to explore educational paths that will help them rebuild their country.

"Every single Ukrainian student who I've spoken to wants to go back," said Yale University professor Arne Westad, an expert in Russian history. "And they really want to go back as quickly as possible," he added.

Most of the schools are offering similar help to Russian students. They recognize the students cannot influence government policy in Ukraine and are also experiencing the war's harmful effects.

application – n. an official and usually written request for something

haven – n. a place that provides safety or refuge

compass – n. an instrument that shows which direction a person is going in

opportunity – n. a situation in which it is possible for a person to do something