Some US Schools Build Housing to Keep Teachers

Update Required To play the media you will need to either update your browser to a recent version or update your Flash plugin.
By Anna Matteo
31 July 2022


Recently, a high school teacher in California's San Francisco Bay area moved out of a small apartment that she shared and into her own place.

For 41-year-old Lisa Raskin, a San Francisco native, this was once an impossible dream. In the city of San Francisco, property is very costly. Rent payments are high. And there is resistance to new housing.

But now, Raskin pays $1,500 a month for a one-bedroom apartment. And her new home is within walking distance of her job. 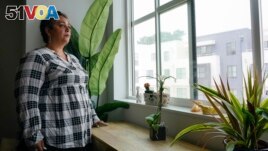 Lisa Raskin, who is a teacher at Jefferson Union High School District, poses for a photograph inside her new one-bedroom apartment in Daly City, Calif., Friday, July 8, 2022. (AP Photo/Godofredo A. V&#225;squez)

She told the Associated Press, or AP, "I have a sense of community, which I think is more valuable than anything else. More districts really need to consider this model. I think it shows educators that they value them."

Her employer is a 4,000-student school district south of San Francisco. In May, that district made 122 apartments available for its teachers and workers.

In the state of West Virginia in a town called Welch, the American Federation of Teachers, AFT, recently helped to open a building with apartments and shops for teachers. Welch officials say they hope the housing and shopping complex will bring economic development to the town.

Teachers were traveling "hours and hours to get to school and back," said Randi Weingarten. She is the AFT labor union president.

"It's like a great gift coming from the district," said math teacher Eleonor Obedoza. She was speaking about the new three-bedroom apartment that her family rents.

Jeff Vincent is co-founder and director of the Center for Cities & Schools at the University of California, Berkeley. Vincent said workforce housing is rare. But, he expects more school districts to explore offering affordable housing. He said, when teachers live in the communities where they work, they can get to know students and families better.

Currently in many parts of the U.S., there is a lack of teachers and affordable housing. So, some school districts want to find and keep educators by offering them workforce housing. They could serve as a model for other school districts in the country.

But such projects also face problems. Some people living in the districts do not want affordable housing for teachers and workers. Vincent said there are those who question "whether schools should be doing this with their land."

About one fourth of the 500 employees at Jefferson Union High School District were leaving every year. The district could not keep teachers from moving to schools that could pay more.

So in the school year starting in 2017, officials came up with a plan to find and keep teachers. This plan included a $75 million housing complex for teachers and workers. It was paid for in part by a $30 million bond measure approved by voters in 2018. That means the local government borrowed the money.

But the district also has a bigger plan. It wants to lease school property for a 1,200-unit complex that would mix shops and restaurants with housing. The housing would be sold at full market price. The district says this plan would also create enough money to increase teacher pay.

However, the Sierra Club's local office and others oppose the plan. The environmental organization wants more housing at below-market rents and taller buildings to preserve more open space.

"It's terrible the schools have to come up with schemes to build housing to pay teachers," said Gladwyn d'Souza, a member of the Sierra Club. She supports workforce housing. But she said there should be more affordable homes for everyone.

People living at the school district workforce housing complex can stay up to five years. After that time, they might have saved enough money for a down payment on a house.

But houses are also becoming more costly to buy.

In 2016, the real estate company Redfin released a study. It found that an average teacher's salary of $62,800 could pay for only 20 percent of homes for sale in major U.S. cities. That percentage was down from 34 percent in 2012.

This summer, San Francisco Unified School District plans to start building a 135-unit complex for educators. It could be ready in 2024 — two years behind later than planned.

Cassondra Curiel is president of United Educators of San Francisco, a labor rights group. She told the AP, "It was a fight to get it...And it'll be great for those folks who get in there." But she added, "...[I]t's not enough."

Melissa Kallstrom is the mother of a student in a San Francisco area school district. She does not object to new homes for educators. But she objects to plans to tear up the community garden. She and others say the garden provides rare green space.

Lisa Raskin, who teaches health and social science, understands that change is difficult. She grew up in San Francisco's Mission District. It used to be a working-class neighborhood. Now, it is too costly for her to live there by herself.

During the pandemic, Raskin moved out of her mother's house to share an apartment with a friend. But the living space was small. Raskin said the chance to move into a place of her own was like hitting the jackpot, or winning a big prize.

district –n. an area established by a government for official government business

rent –n. money that you pay in return for being able to use property and especially to live in an apartment or house that belongs to someone else

affordable –adj. something that can be paid for without too much difficulty

scheme –n. the way that something is arranged or organized

lease –v. a legal agreement that lets someone use a car, house, or property for a period of time in return for payment

unit –n. one of a number of apartments in a building

down payment –n. a first payment that you make when you buy something with an agreement to pay the rest later