Teachers on School Shootings: ‘None of Us Are Built for This’

Update Required To play the media you will need to either update your browser to a recent version or update your Flash plugin.
By Dan Novak
28 June 2022


A recent incident inside a West Virginia high school demonstrated how school shootings have greatly affected teachers and students across the United States.

Teacher Jessica Salfia was putting up balloons at the school to celebrate graduating students. When two of the balloons popped, students thought the sound was gunfire. The incident led to panic inside a school hallway between classes.

One student fell to the floor. Two others quickly ran into open classrooms. Salfia shouted, "It's balloons! Balloons!" The teacher apologized to the students, who then realized the noise did not come from gunshots. 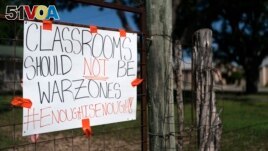 A sign asking for a change hangs on a fence near Robb Elementary School in Uvalde, Texas, Friday, June 3, 2022. (AP Photo/Jae C. Hong)

The students' reaction shows how the world has changed in recent years, even for teachers and students who have never experienced school shootings.

The incident happened at Spring Mills High School in Martinsburg, West Virginia. It was one day before a gunman killed 19 children and two teachers inside a classroom in Uvalde, Texas.

Salfia has a closer connection to gun threats than most. Her mother, also a West Virginia teacher, had a student pull out a gun in her classroom seven years ago. After talking to the student for two hours, she helped bring the incident to a peaceful end.

For any teacher, the job seems to ask the impossible. Teachers are already expected to be guidance counselors, social workers, parental models and more to their students. Now, they are increasingly being called upon to be protectors of students, too.

Salfia said teachers think about the risks of school shootings every day. "What would happen if one of my students came to school armed that day?" she said. "This is a constant thread of thought."

George Theoharis is a former teacher who has spent the last 18 years training teachers and school officials at Syracuse University. He said teachers are now working harder than ever — even more than last year, "when the pandemic was newer."

"We're sort of left in this moment where we do expect teachers and schools to solve all our problems and do it quickly," Theoharis said.

Schools nationwide have been dealing with more student misbehavior and mental health problems since the return to in-person learning. In growing numbers, teens have been turning to gun violence to resolve immediate conflicts, researchers say.

In Nashville, Tennessee, three Inglewood Elementary School workers last month had to restrain a man who had jumped a school fence.

The three workers watched in horror less than two weeks later, when the Uvalde shooting happened. "In my head, immediately I thought, ‘That could have been me and my kids,'" said teacher Rachel Davis.

Adding to the anger for some educators was the quick blaming of a teacher for opening a door the attacker used to enter the school in Uvalde. Days later, officials said the teacher had closed the door, but it did not lock.

Salfia says teachers are expected to do a lot for their students.

"You're a first responder. You're a first reporter. If there's an issue in the home, you are sometimes the only chance a kid has at love, at getting food that day, at maybe getting a warm and safe place to be that day. The scope of the job is huge right now."

There is also a feeling that while school shootings continue to happen, politicians cannot come together to do anything about them.

For about 45 minutes, Smith said, no one outside the room knew the class was in serious danger. She drew the student's attention away from others and tried to keep him talking while she walked around the room with him. Eventually, police persuaded the boy to let everyone go and the gun was not fired.

Smith said, "I had 29 freshmen sitting there looking at me, and I would have to say that they were the heroes."

When asked what she tells others hoping to go into teaching, Salfia repeats another teacher's description of what today's teachers are facing: "None of us are built for this."

balloon — n. a thin usually rubber bag that becomes larger when it is filled with air or gas

constant — adj. happening all the time or very often over a period of time

first responder — n. a person (such as a police officer or an EMT) who is among those responsible for going immediately to the scene of an accident or emergency to provide assistance

scope — n. the area that is included in or dealt with by something

remote — adj. connected to a computer system from another place