The Good and the Bad of Rain and Clouds

Update Required To play the media you will need to either update your browser to a recent version or update your Flash plugin.
By Anna Matteo
18 August, 2018

On this program we explore common words and expressions in American English.

Some are very common. For example, I'm sure that most of you have heard the expression "raining cats and dogs." We use it when it is raining very, very hard. In other words, when it is pouring!

Now, we have another useful expression about hard rain: "When it rains, it pours!" This means that when something bad happens, other bad things usually happen at the same time. We often use this saying after someone describes a lot of bad things, one after the other, like in this example. 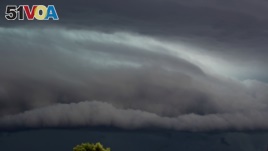 A huge cloud forms as a storm moves through Queensland, Australia, Dec. 8, 2017. (This picture is from Instagram/modernwifelife31/Handout and distributed by REUTERS.)

Boy, my sister is really having a hard time these days.

First, someone stole her car. Then she broke her arm in a biking accident and a falling tree cut a hole in her house – all in one week!

That is one unlucky week. You know what they say: When it rains, it pours.

When using this expression, know that it can be helpful in any situation. You can say it to your best friend or to your employer. Also, we often say it in a sing-song way, like this – "When it rains ... it pours."

So, even though we mostly use "When it rains, it pours" for bad situations, you can also use it in good ones. However, we only use the next one in bad times.

But, we use this expressions for companies and organizations as well – not just people. For example, currently many scandals surround some women's gymnastic organizations and some universities in the United States. They are under a cloud of suspicion.

But even people for people living under a dark cloud, there is hope. There is always hope. And that brings us to our last expression: Every cloud has a silver lining.

This expression means there is always something hopeful in even the most difficult or unhappy situation. A silver lining on a cloud shows that the sun is behind it. Even a really terrible, bad event may produce something happy or hopeful.

For example, let's say a friend of yours is in a car crash. She is not badly hurt but her car is too damaged to fix. When the tow truck driver comes to take her car off the road, she starts talking to him. They find out that they share a love of old cars. So, they plan to meet the following weekend at a car show. Soon they become great friends. When she tells this story to her friends and family, they often say the same thing: Every cloud has a silver lining!

And that's the end of this Words and Their Stories! I'm Anna Matteo.

Do you have an interesting "cloud" or "rain" expression in your language? Let us know in the Comments Section!

Anna Matteo wrote this story for VOA Learning English. Ashley Thompson was the editor. The song at the end is Creedence Clearwater Revival's "Have You Ever Seen the Rain?"