Update Required To play the media you will need to either update your browser to a recent version or update your Flash plugin.
By Jim Dresbach
04 March, 2016

The debate, on Thursday evening in Detroit, was filled with yelling and personal insults. 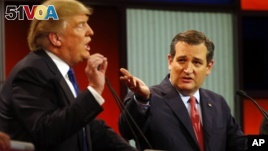 New York businessman Trump called Cruz "lying Ted." Rubio looked at Trump and told him he mocks everybody. Trump returned an insult by calling Rubio, a "lightweight" and "a real con artist."

Cruz and Rubio took the verbal fight to Trump. Cruz accused Trump of being "someone who has used government power for private gain." Rubio said Trump is "trying to con people into giving him their vote."

Cruz belittled Trump, saying: "I think that the American people understand that yelling and cursing at people doesn't make you a tough guy."

Kasich was low-key and stayed out of the verbal fight. He is trailing by a large margin in the polls.

"I have never tried to go and get into these kinds of scrums that we are seeing here," Kasich said. "People say, wherever I go, ‘You seem to be the adult on stage.' "

William Gallo reported on this story for VOANews. Jim Dresbach adapted the report for Learning English. Kathleen Struck was the editor.

What are your feelings about the American presidential campaign? We want to hear from you. Write to us in the Comments Section or visit our 51VOA.COM.

front-runner – n. the person or thing that is most likely to win a race or competition

yelling – v. to say something very loudly especially because you are angry, surprised or trying to get someone's attention

interrupting - v. stopping the progress of an activity

mock – v. to laugh at or make fun of someone or something especially by copying an action or a way of behaving or speaking

lightweight – n. someone or something that has little importance or power

con artist – n. a person who tricks other people in order to get their money