Update Required To play the media you will need to either update your browser to a recent version or update your Flash plugin.
By Christopher Jones-Cruise
28 February, 2016

If they do, Clinton and Trump will greatly increase their lead of delegates and likely become their parties' nominees. 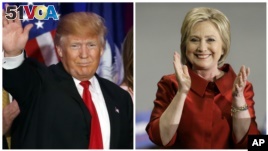 Public opinion studies show Trump has more support than other candidates in many of the so-called "Super Tuesday" states. This week, New Jersey Governor Chris Christie began campaigning for Trump. Until recently, Christie was a presidential candidate.

Super Tuesday is the most important day of the presidential campaign. The person who wins the most elections on that day almost always becomes the nominee of their political party.

VOA National Correspondent Jim Malone reported this story from Washington. Christopher Jones-Cruise adapted it into VOA Learning English. Hai Do was the editor.

delegate – n. a person who is chosen or elected to vote or act for others

primary – n. an election in which members of the same political party run against each other for the chance to be in a larger and more important election