Update Required To play the media you will need to either update your browser to a recent version or update your Flash plugin.
By Caty Weaver
10 February, 2016

The results are not a surprise. Public opinion studies had predicted the two men would win.

The real race was who would finish second among Republican candidates. That position went to Ohio Governor John Kasich.

Candidate Hillary Clinton, a Democrat, called Sanders to congratulate him on his victory.

Sanders remains behind Clinton in most national studies. But he been steadily narrowing the distance between them.

Sanders spoke to supporters at a school in Concord, New Hampshire. He thanked Hillary Clinton for her call and praised her "vigorous campaign."

"Together we have sent a message that will echo from Wall Street to Washington, from Maine to California. And that is that the government of our great country belongs to all the people and not just a handful of wealthy campaign contributors and their Super PACS (independent campaign committees)," Sanders said.

Donald Trump opened his victory speech with a simple "Oh wow." He thanked New Hampshire voters, his family and campaign volunteers. "We are going to make America great again," Trump told supporters. "But we're going to do it the old-fashioned way." 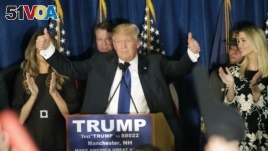 Like Sanders, Trump also talked to his supporters about the money in politics. He said it was very important that he was "self-funding" his campaign.

"I see all of this money being poured into commercials, and it's not their money, it's special interest money."

He suggested that he would not be influenced by special interests as a result of funding his own campaign.

It is still unclear just how big Sanders' and Trump's leads will get.

With about three quarters of the votes counted, Sanders had just under 60 percent, compared to 38 percent for Clinton.

On the Republican side, Trump had 34 percent of the vote.
Kasich had 16 percent. Close behind him were former Florida governor Jeb Bush and Senator Ted Cruz of Texas.

Florida Senator Marco Rubio had hoped to gather Republican support behind his candidacy after a strong showing in Iowa. It was not to be, as Rubio came in fifth.

Frank Luntz is a leading conservative pollster. He says Trump must win New Hampshire by at least 10 percentage points to secure his frontrunner position.

Luntz told VOA, "When you consider all the negative comments that are made about him, all the attacks. If he can survive it, and beat all these guys by 10 points or more, then he's clearly the frontrunner."

turnout – n. the number of people who go to or participate in something

contributor – n. someone who gives (something, such as money, goods, or time) to help a person, group, cause, or organization

old-fashioned – adj. typical of the past in a pleasing or desirable way

pollster – n. someone who makes questions for a poll, asks questions in a poll, or collects and presents results from a poll