Update Required To play the media you will need to either update your browser to a recent version or update your Flash plugin.
By Anne Ball
30 January, 2016


You probably saw Concepcion Picciotto if you visited the White House over the past 35 years or so.

She lived in a camp, in Lafayette Park, right across the street from the official home of U.S. presidents.

Picciotto was a peace activist. Holding up homemade signs with anti-war messages, she kept a vigil in the park through rain and snow and heatwaves. She opposed war, nuclear weapons and violence against children. 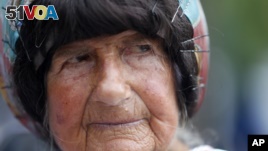 Protester Concepcion Picciotto, who holds a constant peace vigil in Lafayette Park across from the White House in Washington, sits on a park bench after her protest shelter was removed by Park Police, Thursday, Sept. 12, 2013. (AP Photo/Charles Dharapak)

She died January 25 at N Street Village, a shelter for homeless women in Washington.

The Washington Post says she had the longest continuous act of political protest in the United States.

When she died, Concepcion Picciotto was believed to be about 80 years old. She was also known as "Connie" or "Conchita."

She came to the United States as a Spanish immigrant when she was 18. Through the years she spoke English with an accent. The small woman wore a wig and a scarf over a metal helmet.

Walt Palmer worked for ABC News in Washington. Sometimes he was sent to the White House.

"I remember talking to her one spring day in the mid-1980s," Palmer says. "She had particularly big hair. Asking about it, she removed the wig she wore to cover the cooking pot on her head to protect from the 'government X-rays.' ''

It was a story Picciotto told many people. She thought the government was trying to hurt her by aiming X-rays at her head. Only a few people would believe that to be true, and many people questioned her mental health. Others thought she had a clear mind.

Either way, she provided food for thought for people coming to see one of the most famous houses in the world.

"They were much more fascinated with Concepcion Picciotto and how and why she lived outside than they were with the White House," Bonney says. "They asked her how she ate and where she went to the bathroom. She told them how a group of people took care of her and the other activists on the vigil. I remember it was hard to explain later what nuclear weapons were."

It would be impossible to know how many times Picciotto spoke with people passing by. But many people who saw her protest signs would talk about them. Some were even inspired by her peace vigil.

She was married once and had adopted a child with her husband, according to the Washington Post. She was separated from her family and the newspaper says she last saw her child when the girl was very young.

She met a man named William Thomas on the streets of D.C. Together they started the protest in Lafayette Park. Others joined them, including a woman who later married Thomas. He has since died and his wife moved away. Others have worked with Picciotto to keep the vigil.

U.S. Park Police rules say that a temporary shelter must be occupied or it will be taken down. Once, years ago, when Picciotto had let others stay at her camp, they left it empty. The Park Police took it down.

Eleanor Holmes Norton stepped in to help Picciotto. Norton is a member of the U.S. House of Representatives.

Saying the Park Police action was "outrageous," Norton picked up the telephone, called the police and had Picciotto's home put back in the square.

"She inspires me and the great struggle of the people of the District of Columbia for statehood, and she inspires all of us who want peace in this world, and a world free of nuclear arms."

And what about the future of the vigil?

A spokesperson for the U.S. Park Police, says it can stay as long as it is occupied. And for now, the group of peace activists who had kept the vigil with Concepcion Picciotto are still there -- right across the street from the White House.

Anne Ball wrote this story for Learning English. George Grow was the editor.

What do you think of Concepcion Picciotto's more than 30-year vigil for peace? Write to us in the Comments section and post on 51VOA.COM.

vigil – n. an event or a period of time when a person or group stays in a place and quietly waits, prays, etc

accent – n. a way of pronouncing words that occurs among the people in a particular region or country

wig – n. artificial hair that you wear on your head because you are bald or in order to change your appearance

scarf – n. a piece of cloth worn around your head

food for thought – phrase. something that should be thought about or considered carefully

helmet - n. a hard hat that is worn to protect your head

adopted - v. taking a child of other parents legally as your own child

according - adv. as stated in or by