Water Crisis in US City a 'Disaster, Not Just an Emergency'

Update Required To play the media you will need to either update your browser to a recent version or update your Flash plugin.
By Anna Matteo
23 January, 2016


Civil rights activists, politicians and residents are calling the contamination of drinking water in an urban U.S. city "a disaster, not just an emergency."

Michigan Governor Rick Snyder recently apologized for the water disaster in Flint, Michigan, according to the news agency CNN.

Snyder said he would use all his power as governor to solve the water crisis. Snyder asked state legislators for $28 million to fund a series of immediate actions.

The money would be used for things such as supplying bottled water, replacing water filters and other fixtures in high-risk areas, testing children for high lead levels and treating potential physical and emotional health issues, reports CNN.

Snyder said the following statement to the people of Flint: "Your families face a crisis, a crisis you did not create and could not have prevented. I am sorry and I will fix it."

The Republican governor has become the target for much heated criticism because the crisis unfolded under his watch.

Reverend Jesse Jackson is a longtime civil rights leader. He led a delegation of activists.

They addressed a crowd of concerned and angered citizens sitting in a local church.

Jackson spoke later to reporters. He said the residents of Flint have been exposed to contaminated drinking and bathing water for nearly two years.

Jackson described the city as "a crime scene."

Who lives in Flint?

Flint is an industrial, urban area of the state. It is largely an African-American city, where 40 percent of the population lives in poverty. Jackson's visit to Flint came one day after President Barack Obama declared a local state of emergency. This clears the way for federal aid to reach the residents.

Michael Moore is known for his controversial movies about social justice. His new film, "Where to Invade Next," premiered at the Toronto International Film Festival Sept. 2015.

Obama's visit came a day after another visit by controversial filmmaker Michael Moore.

Moore was raised in Flint. He made the 1989 documentary film "Roger & Me."

The film is about the closing of several automobile plants in Flint by CEO of General Motors Roger Smith.

Speaking at City Hall, Moore said the situation is "not just a water crisis. It is "a racial crisis." It is "a poverty crisis."

How did this happen?

According to many reports, the water crisis began 2014.

The city of Flint was in deep financial difficulty. To save money, the city began using water from a local river rather than using pretreated water from the water system of Detroit, a nearby city.

However, the water in the Flint River is highly corrosive. Officials did not properly treat the corrosive water before sending it through lead pipes and into people's homes.

Corrosive means to cause damage to metal or other materials through a chemical process. And that is just what happened.

As the corrosive water traveled through the system of old lead pipes, lead seeped or leached into the water.

To make matters worse, officials did not tell Flint residents about their tainted drinking water supply for a year and a half. Now, the people of Flint are demanding to know who knew what and when.

Flint has since returned to using water from Detroit. However, engineers now say its water distribution system may need replacement. This could cost as much at $1.5 billion.

The Detroit Free Press called on Michigan Governor Rick Snyder to release staff emails. Critics of the governor say his emails may show a pattern of willful neglect by state officials. These same critics say the governor and his staff allegedly attempted to lessen the importance of the contamination and its effects. 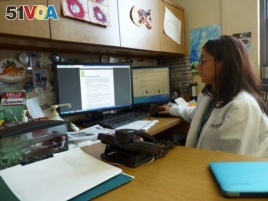 Dr. Mona Hanna-Attisha works at the hospital where more than 2,000 children have been tested for lead since the water switch was made, Jan. 2016. (AP PHOTO)

Dr. Mona Hanna-Attisha is director of pediatric residency at Hurley Children's Hospital. She is being called a hero by many.

The doctor brought the problem of high levels of lead in children to the public's attention. She did this after state agencies first ignored her concerns.

What lead does to a child

Hanna-Attisha explains that lead-contaminated water has lifelong and generational effects. In a television interview, she says it is well-documented that high levels of lead in children can lead to learning disabilities and emotional problems that follow the child into adulthood.

The World Health Organization says excess lead exposure can damage a human's nervous and reproductive systems and the kidneys. High levels of lead can cause high blood pressure and anemia. It also describes lead as "especially harmful to the developing brains of fetuses, young children and to pregnant women."

Additionally, the WHO warns of risks from "irreversible learning disabilities, behavioral problems, and mental retardation. At very high levels, lead can cause convulsions, coma and death."

Earlier this month, Michigan Governor Rick Snyder declared a state of emergency. This allowed the residents of Flint to go to fire stations for a daily case of water per household. 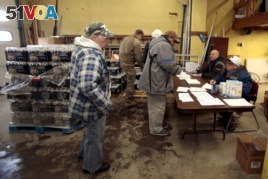 But many blame Snyder for the crisis.

Michigan Attorney General Bill Shuette announced that he will investigate the crisis to determine whether any state laws were broken.

In a recent statement, a civil rights organization, called the NAACP, described the Attorney General's announcement as a "positive and much needed step in the right direction."

The statement went on to say to "expose a city of nearly 100,000 residents, many of them children, to toxic lead is, if not criminal, at the very least inhumane."

contamination – n. to make unfit for use by the introduction of unwholesome or undesirable elements

corrosive – adj. causing damage to metal or other materials through a chemical process

tainted – adj. to make (something) dangerous or dirty especially by adding something harmful or undesirable to it

irreversible – adj. impossible to change back to a previous condition or state

convulsions medical : a sudden violent shaking of the muscles in your body that you are unable to control

coma – n. a state of profound unconsciousness caused by disease, injury, or poison