Update Required To play the media you will need to either update your browser to a recent version or update your Flash plugin.
By Mario Ritter
23 January, 2016


The amount of fish caught worldwide is much larger than has been reported.

And that could mean serious problems for the environment and nations that depend on fisheries.

A new estimate places the world fish catch at 109 million metric tons. That is 32 million tons higher than countries have been reporting yearly. 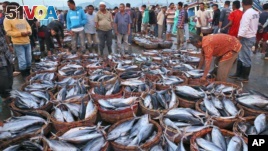 The same report notes that the world's fish catch has been declining since the late 1990s.

Countries report their industrial catches to the United Nations Food and Agriculture Organization. But they do not report other kinds of fishing. These include the catches of small commercial fisheries, what are called artisanal fisheries, and fishing for recreation and individual food.

Daniel Pauly at the University of British Columbia in Canada led the study. He noted that a huge amount of some catches is thrown away.

"For example, shrimp trawlers retain only the shrimp and the fish that they catch – often eight to 10 times as much as the shrimp – gets thrown away."

Pauly told VOA that better estimates of the actual global catch will help ensure there will be enough fish in the future.

"...But our figures suggest that since '96 a rapid decrease is happening. And if you project this forward you end up in a few decades having much less catch, literally no catch. So that is potentially dangerous."

Researchers also found ways the world's fisheries are changing. They found that fishing fleets of larger nations are catching fish in the waters of developing countries more and more. 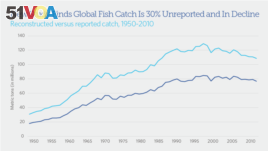 Fish catches have declined in the 90s (Pew Charitable Trusts).

Pauly said he was surprised by the amount of fishing done by foreign fleets in competition with local fishers.

"In West Africa, the figure that was most astonishing is the enormous role of foreign fishing – of European and Asian vessels fishing legally or illegally – and competing against local fishers. On the other hand for the U.S., Australia and some developing countries, such as the Bahamas, what was apparent is the enormous contribution of recreational fisheries, which also never get reported to the FAO."

Steve Herman reported this story for VOA. Mario Ritter adapted it for VOA Learning English. Kathleen Struck was the editor.

fisheries – n. a business that catches and sells fish; a part of the ocean were fish and sea creatures are available

commercial – adj. concerned with earning money as a business

fleet – n. a group of ships that work together for a business or for a country

trawlers – n. a boat used to catch fish with a large net

inaccurate – adj. not correct or exact

astonishing - adj. causing a feeling of great wonder or surprise

role - n. the part that someone has in a special activity or situation

contribution - n. a payment; the act of giving someone something