Update Required To play the media you will need to either update your browser to a recent version or update your Flash plugin.
By Christopher Jones-Cruise
01 February, 2016


People in Iowa will vote for presidential candidates in the Republican and Democratic parties Monday night. 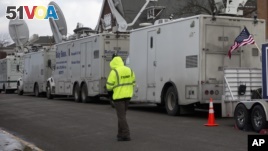 Satellite trucks line the street on the campus of Drake University in Des Moines, Iowa, Jan. 28, 2016.

But both races are close.

Although Sanders is running as a Democrat, he is an independent. He calls himself a democratic socialist.

This voting in states like Iowa is called a caucus. A caucus lets voters of each political party – Democrat and Republican – say who they favor or prefer at this time.

Candidates who win the support of voters in Iowa do not always win the presidency. In 1980, Ronald Reagan lost the Iowa vote but became the Republican party nominee. He won the presidency.

There are 12 Republican candidates and three Democratic candidates.

On Sunday, many of the candidates held events throughout Iowa. They spoke to their supporters and strongly criticized their opponents.

Trump and Cruz are both trying to gain the support of the many Iowans who have strong Christian religious beliefs.

Also on Sunday, Sanders and Clinton reached an agreement with Democratic party officials to have more debates. Many people in the party had asked for them.

The next primary election will take place February 9 in the northeastern state of New Hampshire. Public opinion studies show Sanders has much more support in the state than Clinton. Sanders is from the state of Vermont, which borders New Hampshire.

We want to hear from you. Write to us in the Comments Section or visit 51VOA.COM.

caucus - n. an event in which members of apolitical party gather for the purpose of choosing candidates for an election

primary – adj. voting that reduces the number of candidates before a larger election