Update Required To play the media you will need to either update your browser to a recent version or update your Flash plugin.
By Jim Dresbach
01 February, 2016


Voters in Iowa say they are ready for their life to return to normal.

Iowa is the first state to hold caucuses. These meetings let supporters of the two main parties – Democrat and Republican – state who they would like for president. The Iowa caucus results may suggest who will be each party's candidate for president. But there will be other caucuses and primary elections in the weeks to come.

Iowans, as they are called, say they are proud to hold the first caucus. But they say they also will be happy for things to return to normal. 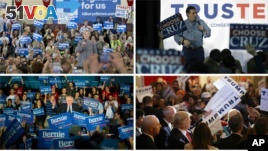 James Uren owns a restaurant in Elk Horn, Iowa. "During the political season," he notes, "you just know you're going to have to answer the (tele)phone five times every night. And the problem with that is that you just don't get a chance to relax."

The 3 million residents of Iowa receive telephone calls from candidates and from groups that measure public opinion.

Before the voting on Monday, media and political campaign vehicles filled parking spots in towns and cities across the state. Iowa voters learned a lot about the candidates from newspaper ads and television commercials.

Darren Zitterich told VOA: "I feel like pulling my hair out, with all the [political] commercials. I swear, there's more commercials than TV shows."

Many text messages were sent out in an effort to influence Democratic and Republican voters.

Many Iowans say they are ready for the political candidates, media workers and pollsters to leave town.

For Patty, a Des Moines resident who would not provide her last name, the text messages bothered her the most.

"They even text my husband, who doesn't know how to text," she said.

Patty added that she is looking forward to Monday night when the caucuses will be finished.

"Tuesday is going to feel so good," she said. "Except then we'll have five days now of who won."

William Gallo reported on this story for VOANews. Jim Dresbach adapted his story for Learning English. Kathleen Struck was the editor.

What do you think of the Iowa caucuses? We want to hear from you. Write to us in the Comments Section or visit our 51VOA.COM.

relax – v. to become or to cause something to become less tense, tight or stiff

parking – n. the act of leaving a car, truck, motorcycle in a particular place

pollster – n. someone who develops questions for a public opinion survey, asks questions and presents the findings

bother – v. to cause someone to feel troubled, worried or concerned