Update Required To play the media you will need to either update your browser to a recent version or update your Flash plugin.
By Bryan Lynn
16 June, 2019


Researchers say they have discovered a plant in Canada that not only eats insects, but also feeds on at least one amphibious creature.

The discovery was recently reported in a study by a research team from Canada's University of Guelph in Ontario. The study was published in the journal Ecology.

The research involved pitcher plants in Ontario's Algonquin Provincial Park. The plants – which take many shapes and sizes and have colorful designs - grow in wetlands across Canada.

A pitcher plant's leaves usually form a tall, narrow pocket that can hold liquid. Insects and spiders that enter the pocket often become trapped and the pitcher plant then feeds on their bodies. 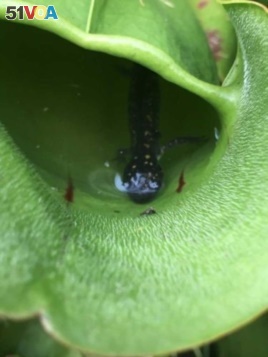 This image shows a pitcher plant with a trapped salamander inside. (M. Alex Smith/University of Guelph)

Pitcher plants are often found in bogs - soft, extremely wet areas. The plants are known for feeding on small organisms – such as insects and spiders – that get caught in the trap.

But the researchers made a surprising discovery - the pitcher plants were also feeding on young salamanders. A salamander is a lizard-like amphibian.

The research team said it believes this is the first time any North American pitcher plants have been observed feeding on anything besides insects or spiders.

In the summer of 2017, then University of Guelph student Teskey Baldwin found a salamander trapped inside a pitcher plant while doing field work in the provincial park. One of the biggest surprises was that the discovery did not happen earlier, the researchers said.

Alex Smith is a biology professor at the University of Guelph and co-writer of the study. He told Canada's CTV News the research station near the bog where the pitcher plants were observed has been there for 70 years.

During visits to a single area of the park in fall of 2018, the research team found almost one in five pitcher plants contained young salamanders. The amphibians were each about as long as a human finger.

Several plants contained more than one captured salamander. Some of the trapped salamanders died within three days, while others lived for up to 19 days, the study found.

The researchers said they do not know what killed the salamanders. They could have died from proteins produced by the pitcher plants that are held in liquid inside the leaves. This liquid mixture is designed to break down organisms trapped in the plants to aid the feeding process.

The researchers suggested other possible causes for the salamander deaths could have included heat, starvation or infections. Organisms living in the pitcher may also help break down the salamanders' bodies.

The study found that there are also several possible reasons the young salamanders are drawn to the plants in the first place. One is that they fall into the plant pockets accidentally. They also could go in to find a place to hide or to feed on insects or spiders already trapped there.

The researchers say pitcher plants clearly get a lot more nutrients from salamanders than from insects and spiders. So there is no reason to think that the plants will not continue feeding on them.

Meat-eating pitcher plants have been known since the eighteenth century, the University of Guelph says. One species discovered 10 years ago in Asia feeds mostly on insects and spiders, but sometimes captures small birds and mice.

Alex Smith said the discovery opens some new questions that future research might help explain. Are salamanders an important feeding source for pitcher plants? Are the plants important "predators" of the amphibians? Might the salamanders compete with plants for insect food?

The university said the discovery area could even be called the "Little Bog of Horrors" after a Broadway musical and film that includes a giant plant that likes to eat people.

Bryan Lynn wrote this story for VOA Learning English, based on reports from the University of Guelph, the journal Ecology and CTV News. Mario Ritter Jr. was the editor.

amphibious – adj. able to live on both land and in water

leaf – n. the flat part of a plant that are joined at one end to the stem or branch

pocket – n. part of something that can hold other things

vertebrate – n. animal that has a spine

predator – n. animal that hunts and kills other animals for food