Update Required To play the media you will need to either update your browser to a recent version or update your Flash plugin.
By Susan Shand
08 December, 2018


The threat of rising sea levels and erosion have many people worried about the future of lighthouses in the United States and around the world.

Lighthouses are built on or near the shore. Their powerful lights help guide ships away from danger.

The East Point Lighthouse in New Jersey has been lighting up the Delaware Bay for more than 200 years. But the waters that surround it may bring about its end.

During storms, water hits a wall that is just 9 meters from the front of the lighthouse. After each major storm, the state and local governments rebuild around the lighthouse. They use 1,300-kilogram sand bags and other methods to protect it.

Nancy Patterson is president of the Maurice River Historical Society. She says something needs to be done more permanently to protect East Point, now.

"This history matters," she said. "We need to do something — now — while there's still something to save."

She recently led a save-the-lighthouse meeting to call attention to the situation. She wanted to push the state's Department of Environmental Protection to do something to save East Point before it falls into the bay. A simple fix would cost the state $3 million. Officials are considering what to do to try to save the lighthouse.

Some of America's lighthouses continue to be used to guide ships and other boats. But a good number have been replaced by modern technology. Instead, the lighthouses are valued more for historical reasons.

Climate change is warming the oceans and melting polar ice, leading to rises in sea levels. The National Oceanic and Atmospheric Administration, or NOAA, says sea levels worldwide have been rising over the past 100 years. It says the rate has increased especially over the past 20 years. 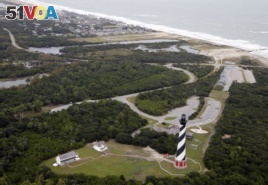 In New Jersey, seas have risen by 0.4 meters over the past 100 years, said Benjamin Horton, a professor at Rutgers University. He is a leading expert on climate change and sea level rise. Horton and other Rutgers researchers say that by 2050, the seas around East Point will have risen another 0.4 meters.

Tim Harrison is the editor of Lighthouse Digest, a publication based in the northern state of Maine. It has a list of 53 lighthouses around the United States that may be lost because of the effects of climate change.

"Lighthouses were built for one purpose: to save lives," he said. "Now it's our turn to step up and save these lighthouses."

But some lighthouses have already been lost. Both the Galveston Jetty Lighthouse in Texas and the Sabine Bank Lighthouse in Louisiana were lost to storms or rising seas, Harrison explained. And the Kauhola Point Lighthouse on Hawaii's Big Island was taken down after erosion nearby was so severe that it could not be saved.

Other lighthouses that are considered to be in danger from rising seas include the Sand Island Lighthouse at the mouth of Mobile Bay in Alabama, the Morris Island Lighthouse near Charleston, South Carolina, and the New Point Comfort Lighthouse in Virginia.

The Associated Press reported this story. Susan Shand adapted this story for Learning English. George Grow was the editor.

erosion – n. the gradual destruction of something by natural forces

bay – n. a large area of water that is part of an ocean or lake and partly surrounded by land

navigation – n. the act, activity, or process of finding the way to get to a place when you are traveling in a ship, airplane, car

polar – adj. of or relating to the North or South Pole or the region around it

relocation – n. the act of moving something to