Update Required To play the media you will need to either update your browser to a recent version or update your Flash plugin.
By Dan Friedell
06 January, 2016

Rosa Parks is a hero from the American civil rights movement in the 1950s.

Parks, an African-American, is famous for not giving up her seat on a segregated bus in favor of a white passenger. She was arrested by police for disobeying the rules.

This happened in Montgomery, Alabama in 1955. But since then, Rosa Parks' name is sometimes used when Americans are talking about taking a political or social stand. 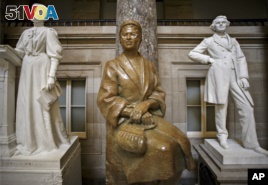 Maybe you are following the story about the men who are occupying a U.S. federal building in rural Oregon. Some believe that Ammon Bundy and his followers are taking a stand.

This morning on Twitter, people expressed their outrage when a Twitter account that people thought belonged to Bundy compared what is happening in Oregon to what Parks did 60 years ago.

Rosa Parks' name was mentioned on Twitter all day as people expressed their opinions.

Gwen Ifil hosts a political talk show on PBS in the United States.

She wrote: "I was so excited to see Rosa Parks trending. Then, cruel disappointment."

But later in the day people said they didn't think the account @Ammon_Bundy belonged to the militia leader. A reporter from the broadcaster MSNBC who is following the story in Oregon says Bundy does not have a Twitter account.

Until then, several stories had already been written about Bundy's alleged comparison.

The 140-character limit is to blame.

Twitter started as a "micro-blogging" service almost 10 years ago.

But when more people started using the social media platform, the complaint of "I don't have enough room" was heard far and wide.

Instead of a short "quip," people started sending a series of tweets on the same topic. Sometimes it was hard to understand which tweet should be read first.

Well, it looks like Twitter is thinking about expanding its character limit to 10,000. The service thinks increasing the character limit might entice new users to join the platform.

Some people are for the expansion.

Some people are against it.
But either way, lots of people have an opinion.

An Old Ship Is Discovered

A construction crew in Alexandria, Virginia, near Washington, D.C., unearthed an interesting artifact this week.

A ship from the 1770s emerged as a construction team was digging out land where a hotel will soon be built.

The archaeological company found some old wood at the site. It turns out the wood was part of a 50-foot long section of a boat that may have been three times that size.

One of the archaeologists called the discovery "the jewel in the crown."

The firm that is building the hotel is going to pay to remove the ship. The City of Alexandria will have to decide how to preserve the ship.

What would you do with thousands more characters on Twitter? We want to hear from you. Write to us in the Comments Section or on 51VOA.COM.

entice – v. to attract (someone) especially by offering or showing something that is appealing, interesting, etc.

militia – n. a group of people who are not part of the armed forces of a country but are trained like soldiers

platform – n. something that allows someone to tell a large number of people about an idea, product, etc.

emerge – v. to rise or appear from a hidden or unknown place or condition :to come out into view

take a stand – v. to believe in something strongly