Update Required To play the media you will need to either update your browser to a recent version or update your Flash plugin.
By VOA
04 January, 2016

Over the weekend, protesters with guns took control of a U.S. wildlife refuge in the state of Oregon. They are protesting the sentencing of two ranchers in the state found guilty of arson.

The armed protesters say they are anti-government. They say the ranchers' punishment is too harsh, and that the government is not respecting land rights.

One of the protest leaders is Ammon Bundy. He wrote on Facebook that the goal of the protest is to "restore the rights to the people here so that they can use the land and resources. All of them."

In a press conference on Monday, the group named themselves "Citizens for Constitutional Freedom."

Ammon Bundy told the media, "Our purpose, as we have shown, is to restore and defend the Constitution."

Government officials have not said how they planned to respond to the occupation of the wildlife refuge. 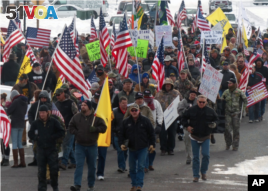 Protesters march in support of an Oregon ranching family facing jail time for arson in Burns, Ore., Jan. 2, 2016. Family members were convicted of the arsons three years ago and served time. But a judge ruled their terms were too short under federal law.

As the standoff continues, social media is mocking the protesters.

The hashtag combines the al Qaeda terrorist group name and the American English contraction y'all. Y'all is often used by rural Americans.

Twitter user Annie Post wrote, "If your master plan is to overthrow the world's most powerful government and you attack a remote bird sanctuary you might be #YallQaeda."

Other hashtags like #VanillaISIS and #YeeHawd mocked the protesters in a similar way.

The hashtag #whiteprivilege also trended in connection to the protests in Oregon. "White privilege" is a term for social privileges that benefit people who are identified as white. The Oregon protesters are all white. Some Twitter users questioned why the response by the government to a large group of heavily armed people was not stronger.

Others questioned why the "Citizens for Constitutional Freedom" is considered protest group, not a terrorist group.

rancher - n. a person who lives and works on a large farm, known as a ranch

arson - n. the illegal burning of a building or other property : the crime of setting fire to something

redneck - adj. (informal) a white person who lives in a small town, especially in the southern U.S., who typically has a working-class job, and who is seen by others as being uneducated and having opinions and attitudes that are offensive

mock - v. to criticize and laugh at (someone or something) for being bad, worthless, or unimportant