Meningitis is spreading across West Africa. The brain disease is a threat every year across 21 African countries. Health officials call this area, "the meningitis belt."

Now, scientists have found they can predict and prepare for this and other diseases. How? They use information from satellites orbiting the Earth.

Every year, dust storms blow across the Sahel area of Africa. And every year, meningitis crosses the Sahel after the storms. Carlos Perez Garcia-Pando is an atmospheric scientist with the American space agency NASA. He spoke to VOA on Skype.

"Meningitis has been one of the most feared dry season diseases in Africa for a long time."

The Sahel stretches from the West African nation of Senegal to Ethiopia in the east. Tens of thousands of people across this area get the disease each year. About 10 percent of those infected die from the disease. Another 10 to 20 percent suffer permanent brain or nerve damage. 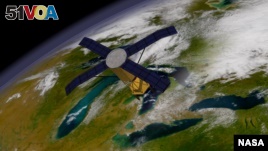 Mr. Garcia-Pando says scientists have yet to understand why meningitis appears to follow the seasonal dust storms in the Sahel. But he says experts do have the technology to study the storms. Satellites can watch these storms develop and examine the conditions that create them.

The NASA scientist says dust storms are his specialty. Yet he admits he had not studied meningitis until the World Health Organization contacted him.

There are not enough vaccines available to protect everyone in the Sahel from meningitis. But Mr. Perez Garcia-Pando says it would help to know when and where the disease will strike.

So he and other researchers developed a system that studies satellite measurements of dust, wind and humidity levels across the Sahel. The researchers also need to know the number of cases already identified by the end of the year. Using this information, they found they could predict how bad the next meningitis season would be.

This is just one of several ways experts are looking to the skies for help in predicting the spread of disease.

Nita Bharti is with Penn State University. She says she can predict the spread of measles by watching city lights grow brighter.

"The changes in brightness are telling us something about increasing and decreasing human aggregation, and that's very likely driving the transmission of measles."

Ms. Bharti spoke to VOA on Skype. She says the disease measles loves a crowd. In Niger's capital, Niamey, the population grows in the dry season as farmers arrive from the countryside. They are looking for work in the city.

Brightness from their electric lights and cooking fires can be seen in satellite imagery of the area. Ms. Bharti and her team found they could predict how measles would spread through Niamey by watching parts of the city light up.

"The satellite can become a really powerful public health tool."

That was Rita Colwell of the University of Maryland. Her group found it could predict cases of the deadly disease cholera in Bangladesh by using satellite information about conditions in the Bay of Bengal.

Cholera bacteria live on sea creatures that eat very small organisms known as plankton. She and NASA researchers thought they could predict an increase in cholera cases by studying plankton levels in the water.

"I'll never forget. We were doing the calculations, and ‘bingo'! It just fell right into place. It was very exciting."

Her group and other researchers hope to use satellites in disease prediction as other scientists use them to predict the weather.

belt – n. an area or place where a culture, a kind of crop or life forms are found

atmospheric – adj. relating to the atmosphere

humidity – adj. relating to wetness; n. – amount of moisture, wetness, in the atmosphere.