Update Required To play the media you will need to either update your browser to a recent version or update your Flash plugin.
By Bryan Lynn
16 January, 2018


Car manufacturers are wasting no time preparing for the day when Saudi Arabian women will be permitted to drive.

The first car show just for women was recently held at a shopping center in the western coastal city of Jeddah.

The event came a few months after Saudi Arabia's King Salman ordered an end to a longtime ban on women drivers. An announcement in September said the order to give women legal permission to drive would be carried out by June 2018.

Pink, orange and yellow balloons were placed in the showroom to welcome the women. Attendees were seen looking at different kinds of vehicles. Many sat inside the cars and some even posed for photos and selfies in front of their favorite models.

One possible customer, Ghada al-Ali, said the car show was "a big deal" because it was the first such event to be held in the kingdom. "I've always been interested in cars, but we didn't have the ability to drive," she said. "Now I'm very interested in buying a car."

Another visitor said the main thing she liked about the car show is that it emphasized the idea of a woman driving a car. She added that it was also a good way for the whole family to get to learn about all the models. "Before you start driving, you need to know more about cars," she said.

Sharifa Mohammad supervised saleswomen at the event. She said the place where the show was held made perfect sense. "This whole mall is run by women anyway. All the cashiers are women. Everyone in the restaurants are women." 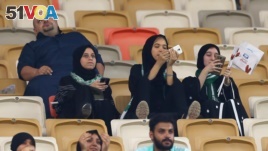 Female supporters of Al-Ahli get the chance to cheer on their team from inside a formerly men-only stadium in Jeddah for the first time. (AFP)

Saudi Arabia's decision to end the ban on women drivers is part of a larger effort by the country's 32-year-old Crown Prince Mohammed bin Salman. He has proposed many economic and social reforms. Some reforms have faced opposition from conservative clergymen with large followings.

One recent government decision gave women the right to attend events at what were once male-only sports stadiums. Another lifted a ban on movie theaters.

Bryan Lynn wrote this story for VOA Learning English, based on reports from Reuters and Agence France-Presse. Mario Ritter was the editor.

emphasize – v. to place special emphasis on something

cashier – n. a person who takes in or gives out money in a store or other business