Saudi Crown Prince Mohammed bin Salmon says he takes "full responsibility" for the killing of Saudi journalist Jamal Khashoggi. But the crown prince is denying reports that he ordered the killing.

"This was a heinous crime," Prince Mohammed told the American television show "60 Minutes." "But I take full responsibility as a leader in Saudi Arabia, especially since it was committed by individuals working for the Saudi government."

Khashoggi entered the Saudi diplomatic office in Istanbul, Turkey on October 2, 2018. There is no evidence he ever left the building. Saudi Arabia has charged 11 people in connection with his killing.

The crown prince's comments were broadcast two days after Saudi Arabia announced plans to open its doors to foreign tourists. The Saudi government launched a new visa program for 49 countries on Friday. And it is appealing to foreign companies to invest in the country's tourism industry.

Saudi Arabia's tourism chief Ahmed al-Khateeb noted that alcoholic drinks will still be banned. "We will have enough tourists to come to Saudi Arabia to enjoy other things," he told the Reuters news agency.

Until now, most of the foreigners going to Saudi Arabia have been business travelers, individuals working in the country and their families. The government approves special visas to Muslims who want to visit Mecca and Medina, two of Islam's holiest cities. 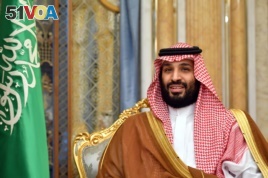 For the Saudi government's new plan to succeed, Saudi Arabia must hold down threats from Iran, its long-time enemy.

Khateeb said the country is "very, very safe" and the attack would not affect plans to increase tourists.

But why would a tourist want to go to Saudi Arabia?

"We have a great culture where many, many tourists would love to come and explore this culture and learn more about it and see it and experience it," said Khateeb.

Getting hundreds of thousands of Saudis into the workplace remains a major issue for the crown prince. Currently, the official unemployment rate is over 12 percent.

commit – v. to carry out

tourist – n. someone who makes a trip for pleasure or cultural reasons