Update Required To play the media you will need to either update your browser to a recent version or update your Flash plugin.
By VOA
30 October, 2012

Scientists are criticizing a study that said laboratory rats developed tumors after they ate genetically modified corn. The research appears in the journal Food and Chemical Toxicology and includes pictures of rats with large tumors. The study said the animals developed the growths after two years of being fed genetically changed maize.

Gilles-Eric Seralini from the University of Caen in French was the lead author. 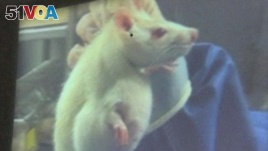 A study published in Food and Chemical Toxicology included disturbing photos of rats researchers say grew giant tumors after eating GMO corn for two years.(Reuters)
"GM foods have been evaluated in an extremely poor and lax way with much less analysis than we have done," he says.

Alan McHughen of the University of California, Riverside, is a genetic expert with the National Academy of Sciences in the United States.

"First of all, the authors of the study used a line of rats that was genetically predisposed to form tumors in the first place. So right off the bat the whole study was suspect."

At the University of California, Davis, toxicologist Alison van Eenennaam suggested that the study was an attempt to scare the public.

"I think it was a cynical ploy to exploit the scientific process to create fear in the minds of consumers."

Even opponents of genetic engineering agree there were some problems with the study methods. Michael Hansen with the group Consumers Union says there should be more long-term studies -- and more rules for genetically modified foods.

"There should be required safety assessments before these crops are put on the market. That is not what happens in the United States."

Safety assessments are voluntary when companies ask the government to approve new GM crops. These assessments often include ninety-day rat feeding tests. This is the international standard. And Alison van Eenennaam says longer studies have not found major problems.

Several French science academies said the release of a book and film about the work at the same time as the study raised ethical concerns. The French food safety agency called for more publicly funded research that would last the lifetime of the experimental animals.

Voters in California will vote Tuesday on a ballot measure to require special notices on all foods made with genetically modified organisms.

Supporters of the ballot question have used the disputed new study to push their campaign for required GMO labeling in California.