Scientists Find No Evidence of Yeti

Update Required To play the media you will need to either update your browser to a recent version or update your Flash plugin.
By John Russell
02 December, 2017


For decades, a large creature called a Yeti has been talked about in Western popular culture. It has appeared in films, cartoons, video games and more.

The yeti is large and hairy and walks on two feet. Some people claim they have seen a yeti in the Himalayan Mountains in Asia.

It has a fearsome reputation. 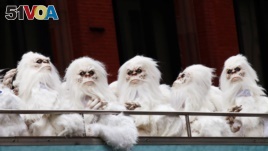 Consider a scene from the American cartoon show, Scooby Doo:

-Apparently every restaurant that's ever opened here closed down immediately -- under suspicious circumstances.

New genetic research suggests that this huge beast may, in fact, exist in the Himalayas.

But it's probably just a bear.

A team of scientists said this week that they had studied the DNA of nine samples from museums and private collections. All of the samples were said to have come from the yeti.

They found that eight of the nine samples came from bears – Asian black bears, Himalayan brown bears and Tibetan brown bears, to be exact. The one remaining sample came from a dog, the researchers found.

Charlotte Lindqvist studies bear genetics at the State University of New York at Buffalo. She is one of the writers of the yeti report published recently in the scientific journal "Proceedings of the Royal Society B." She said the report's findings "strongly suggest" that the legend of the yeti is connected closely to bears that live in the mountainous area.

Lindqvist called the study the most detailed research to date of so-called yeti specimens.

While the recent study did not identify a yeti, it did give scientists information about the area's bear populations.

The brown bears living high in the Tibetan Plateau and the western Himalayan Mountains appear to belong to two separate bear populations, researchers found. Despite living fairly close to each other, those two populations have been separated for thousands of years, Lindqvist said.

Will Dunham reported on this story for Reuters. John Russell adapted it for Learning English. Ashley Thompson was the editor.

fecal – adj. solid waste that is released from the body

specimen – n. a small amount or piece of something that can be tested or examined