Can Cameras and Machines Recognize Lying in Your Face?

Update Required To play the media you will need to either update your browser to a recent version or update your Flash plugin.
By Bryan Lynn
22 November, 2017


One of the most popular tools on Apple's new iPhone X is its facial recognition system.

This latest iPhone gives users the power to open the device just by looking at it. The smartphone has performed well in tests set up to trick it into opening for an unapproved user.

The same kind of facial recognition system is also used for other purposes. One area that will depend heavily on the technology in the future is lie detection.

Traditional lie detection machines, called polygraphs, use sensors connected to the body to measure physical changes in the body. These include blood pressure, breathing and heart rates and the amount of perspiration on the skin.

The person is asked a series of questions during the test. Any physical changes are studied to see which questions caused the reactions. The operator of the test then makes a decision about whether the results suggest the individual was lying or not.

In the future, experts say, lie detector tests will be carried out by systems that use video and machines. Researchers have a term for the intelligence shown by computers and other mechanical devices: artificial intelligence.

One company developing this kind of system is SilverLogic Labs in Seattle, Washington.

SilverLogic Labs calls its high-tech lie detector a "passive polygraph." The most important piece of equipment is a video camera, which captures all a person's visual and spoken reactions.

Jerimiah Hamon is the company's chief executive officer. He says the video images gather data that is then processed to make a decision about truthfulness.

"We're breaking it (footage) down into data and then using quant methods, or quantitative math, and deep learning from the videos to determine how a person's emotional responses are tied to some stimulus. So in this instance, it was questions."

This technology is not new. It was first developed to measure the reactions people had while watching movies and television shows. Earlier studies showed this method was more exact in learning the true feelings of individuals who might try to suppress their honest opinions when answering questions. 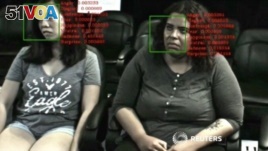 U.S.-based SilverLogic Labs conducts a test with lie detection technology that has also been used by the entertainment industry to test reactions of people watching movies and television. (Reuters)

SilverLogic Labs uses an algorithm to study the video of facial reactions of test subjects. It seeks to identify emotions, including anger, happiness and fear.

Rabia Piacentini is the company's operations manager. She says the camera can gather detailed information to measure a number of emotional reactions. The data is processed by the machine, which then decides how truthful the subject is being.

In a demonstration of the system, the machine detects sadness.

"Have you ever hurt someone intentionally?"

The tester says this suggests the subject is lying since many people show visual emotions when not telling the truth.

The idea of a video camera recording emotional responses and testing truthfulness – possibly even secretly - raises questions about privacy.

But SilverLogic Labs rejects those concerns. It says privacy only becomes a problem when the technology is misused. The company's Jerimiah Hamon said he also believes a machine lie detector can be a better judge than a human tester.

"I think this is actually a super enhancement to civil rights, because cameras and computers aren't biased to race, ethnicity, age, gender - any of that."

In another use of the technology, the United States and Canada have studied how facial recognition systems might be used to detect lying at the border.

The system is called the Automated Virtual Agent for Truth Assessments in Real Time, or AVATAR. It uses a computer-generated face that asks travelers a series of questions. A camera inside the machine studies how the person reacts. It can recognize changes in the eyes and voice, as well as any body movements.

If the system identifies a traveler as possibly lying, that person could be stopped and asked to complete additional security testing.

Developers of this technology say it could be used for other purposes as well. They believe it could help police detect untruthfulness and might be used by companies interviewing people for employment.

Bryan Lynn wrote this story for VOA Learning English. His story was based on reports from the Reuters news service and other sources. George Grow was the editor.

sensor – n. a device that detects or senses heat, light, sound, motion and then reacts to it in a particular way

perspiration – n. clear liquid that forms on skin when a person is hot or nervous

passive – adj. something that happens without specific action being taken

quantitative – adj. relating to how much there is of something

stimulus – n. something that causes something else to happen

enhancement – n. an improvement in something

detection – n. the act of identifying the presence of something