Update Required To play the media you will need to either update your browser to a recent version or update your Flash plugin.
By Mario Ritter
19 November, 2017


International scientists think the amount of carbon dioxide emissions released into Earth's atmosphere will rise by two percent in 2017.

The number represents the first increase in worldwide carbon emissions in three years. The amount produced was unchanged from 2014 to 2016.

Carbon dioxide, known by the chemical expression CO2, is a colorless gas found in nature. Many scientists believe that it and other gases released by factories, vehicles and other human activities are responsible for a general warming on our planet. They believe these gases trap the sun's heat in the atmosphere. This effect is known as global warming.

Last week, scientists with the Global Carbon Project reported that China, the world's largest producer of CO2, is the main reason for the increase in emissions. China's emissions are predicted to rise by over three percent this year.

As a result, the scientists warn that emission goals set by the Paris Agreement on climate change will be more difficult to reach.

Corinne Le Quere is the lead researcher for the Global Carbon Project. In a statement, she said, "With global CO2 emissions from all human activities estimated at 41 billion tonnes for 2017, time is running out on our ability to keep warming well below 2° Celsius (C), let alone 1.5°C."

The group's report came as representatives from more than 190 countries met in Germany to discuss details of the climate agreement.

The Paris Agreement on climate change is an international deal meant to keep the Earth's atmosphere from warming too much.

Governments agreed in 2015 on a long-term goal of keeping the global average temperature "to well below 2°C above pre-industrial levels."

The United Nations website for Paris Agreement issues notes that 170 parties have approved the deal.

The United States signed the Paris Agreement in 2016, but President Donald Trump has announced plans to withdraw the U.S. from the deal. He said it does not treat all parties equally and could hurt America's economic growth.

In 2017, U.S. carbon emissions are predicted to decrease by 0.4 percent from the year before. American emissions have been falling for several years, although the decrease is expected to slow in 2017.

The Global Carbon Project report blames the increased use of coal for China's increased emissions and slowing declines in the United States. 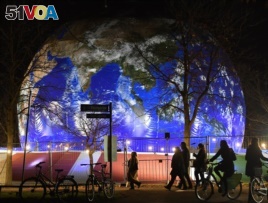 People pass the German pavilion in the shape of the earth during the COP 23 Fiji UN Climate Change Conference in Bonn, Germany, Wednesday evening, Nov. 15, 2017.

The scientists released their findings in the Global Carbon Budget as the U.N. was holding a conference on climate change in Bonn, Germany. The international gathering was the first of its kind since the U.S. said it plans to withdraw from the Paris Agreement.

However, U.S. State Department officials attended the Bonn conference. So did some U.S. lawmakers and the governor of California, Jerry Brown.

The conference is part of a 1994 U.N. convention that sets goals for reducing carbon emissions. The idea of the U.N. effort is to limit temperature increases in the Earth's atmosphere and the risks tied to climate change.

Many of the delegates in Bonn were negotiating details of the Paris Agreement. These include emissions targets for countries that have signed and approved the deal.

The agreement, however, is non-binding, meaning it does not have the force of law. 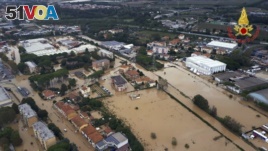 Scientists say extreme weather events like this flood in the city of Leghorn, Italy, following floods in September 2017 are becoming more common because of climate change.

Developing nations want rich ones to pay for some of the effects of climate change. Many poor countries have added little to carbon emissions but say they face high costs linked to environmental and pollution controls.

Crop loss, drought, floods and rising sea levels are a few of the costly problems tied to climate change.

Rich countries say they are already paying billions of dollars to help developing nations with useful technologies, such as renewable energy.

Earlier this month, the U.S. government released its own report on climate research.

The study was overseen by the National Oceanic and Atmospheric Administration. It found that the average temperature worldwide increased by one degree Celsius over the past 115 years.

The government report said: "It is extremely likely that human activities, especially emissions of greenhouse gases, are the dominant cause of the observed warming since the mid-20th century."

The report warned of risks linked to rising temperatures, such as shrinking arctic ice cover and rising sea levels.

It noted that, on average, sea levels have risen between 16 and 21 centimeters since 1900. About seven centimeters of that increase has taken place since 1993. That is the first year that satellites were used to measure sea levels.

Mario Ritter reported this story for VOA Learning English. His report was based on stories from VOANews, Reuters and the Associated Press. George Grow was the editor.

emissions – n. a material that is given off or released

party – n. a person, group of country taking one side of an issue or dispute

decline – v. to go down, to be reduced in number or amount

convention – n. a formal agreement between two or more groups

greenhouse gases – n. a group of gasses that trap heat and are linked to increased temperatures in the atmosphere including carbon dioxide and methane