Update Required To play the media you will need to either update your browser to a recent version or update your Flash plugin.
By John Russell
16 January 2020


Researchers say they have successfully created another embryo of the northern white rhino. The animal risks disappearing forever. Just two remain, and both are female.

This new, viable embryo is the third of its kind. 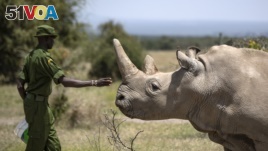 To make the embryo, scientists used eggs from one of the surviving females. They inseminated the eggs with frozen cells from dead males.

The embryos are stored in a cool liquid that protects them. They will be put into a surrogate mother — a southern white rhino — in the coming months.

The Kenya Wildlife Service and officials from Kenya, the Czech Republic, Germany and Italy made a statement about the success. Kenya's wildlife minister, Najib Balala, called the ability to stop the loss of the northern rhino "amazing."

The goal is to create a group of at least five animals that could return to their natural environment. This process could take many years.

Thomas Hildebrandt is with the Leibniz Institute for Zoo & Wildlife Research in Germany. "Now the team will make every effort to achieve the same result for the 30-year-old Najin before it is too late for her," he said.

The operation is safe and can be performed regularly before the animals become too old, the statement said.

The next step is to choose female southern white rhinos among those at Kenya's Ol Pejeta Conservancy to serve as a surrogate mother, Kenya's wildlife minister said.

Years of humans killing the animals illegally have severely reduced the number of rhinos.

The last male northern white rhino was a 45-year-old named Sudan. In 2017, Sudan became famous when he appeared on an online service that connects possible romantic partners. The service, called Tinder, listed the rhino as "The Most Eligible Bachelor in the World." The title was part of a fundraising effort.

Sudan, named for the country where he was born, died in 2018.

Cara Anna reported on this story for the Associated Press. John Russell adapted it for Learning English. Kelly Jean Kelly was the editor.

viable – adj. technical : capable of living or of developing into a living thing

inseminate – v. technical: to put semen into (a woman or a female animal) in order to cause pregnancy

surrogate – adj. always used before a noun a person or thing that takes the place or performs the duties of someone or something else

bachelor – n. a man who is not married