Update Required To play the media you will need to either update your browser to a recent version or update your Flash plugin.
By John Russell
31 July 2022


Mammals can produce their own body heat and control their body temperatures. This process is known as endothermy or warm-bloodedness.

Scientists believe that it may be the reason why mammals likely rule almost every ecosystem. Warm-blooded mammals are more active than cold-blooded animals. They can live in different environments, from the frozen arctic to the boiling desert. And they reproduce faster.

The soft tissues that would give information about warm- or cold-bloodedness are rarely preserved in fossils. So, paleontologists, or experts in the study of fossils, do not know exactly when mammals developed and changed into warm-blooded creatures. 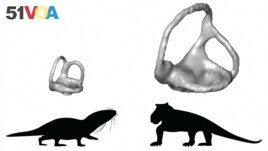 Size differences between inner ears (in grey) of warm-blooded mammaliamorphs (on the left) and cold-blooded, earlier synapsids (on the right). Inner ears are compared for animals of similar body sizes.Romain David and Ricardo Araujo/Handout via REUTERS.

A group of scientists tried to answer that question in a study recently published in Nature.

Ricardo Araújo is a paleontologist at the University of Lisbon. Araújo and a group of researchers proposed that the shape and size of the inner ear structures called canals could be used to study body temperature.

The movement of fluid through the ear canals helps the body to preserve balance and movement. This fluid in cold-blooded animals is cooler and thicker, meaning wider canals are needed. Warm-blooded animals have less ear fluid and smaller canals.

The research team suggested that as body temperature increased and the animals became more active, the shape and size of ear canals changed to preserve balance and movement.

The researchers compared ear canals in 341 animals. They said the ear canals showed that warm-bloodedness, or endothermy, appeared around 233 million years ago, millions of years later than some previous estimates.

Araújo said, "Endothermy is a defining feature of mammals, including us humans. Having a ... high body temperature regulates all our actions and behaviors."

But the first creatures that showed warm-bloodedness are not officially considered to be mammals. These ancient animals known as mammaliamorph synapsids had traits linked with mammals. The first true mammals, the researchers said, appeared roughly 30 million years later.

Importance of being warm-blooded

Ken Angielczyk of the Field Museum in Chicago is a co-leader of the study. He said, "Given how central endothermy is to so many aspects of the body plan, physiology and lifestyle of modern mammals, when it evolved in our ancient ancestors has been a really important unsolved question..."

Endothermy evolved at a time when important elements of the mammal body plan were falling into place, including changes to the backbone, breathing system, and hearing system.

Having warm-bloodedness also helped mammals at an important evolutionary moment when dinosaurs and flying reptiles first appeared on Earth. And mammals took over after the dinosaur mass extinction event 66 million years ago. Among today's animals, mammals and birds are warm-blooded.

"It is maybe too far-fetched, but interesting, to think that the onset of endothermy in our ancestors may have ultimately led to the construction of the Giza pyramids or the development of the smartphone," Araújo said.

"If our ancestors would have not become independent of environmental temperatures, these human achievements would probably not be possible."

regulate – v. to set or adjust the amount, degree, or rate of (something)

far-fetched – adj. not likely to happen or be true